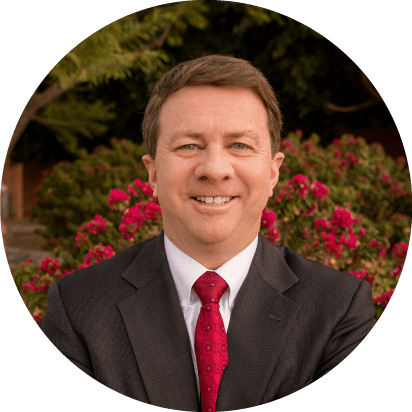 Len Munsil is the 6th President of Arizona Christian University.

Munsil is a third-generation Arizonan and has an accomplished record as an attorney, public policy expert, a conservative organizational entrepreneur, journalist, educator and author.

Under his presidential leadership, which began September 27, 2010, the school changed its name, raised visibility, expanded course offerings and majors, dramatically increased fundraising, clarified its conservative theological and cultural mission, experienced large enrollment gains and more than tripled its campus footprint by moving to a beautiful new campus in Glendale. He is author of “Transforming Culture With Truth” (Second Edition, 2020, Arizona Christian University Press), explaining how ACU’s Core Commitments reflect the biblical principles and values that built Western Civilization, and how young people committed to biblical truth are needed in leadership today. Prior to becoming President, he served as an Adjunct Professor and member of the Board of Trustees at ACU, then known as Southwestern College, beginning in 1994.

During President Munsil’s decade of leadership, ACU – founded in 1960 — achieved its first-ever rankings as a Best College by U.S. News & World Report, and has now been ranked for 6 straight years, including in 2020 being selected No. 1 in Undergraduate Teaching Institution in the West. College Consensus twice ranked ACU as the No. 1 University in Arizona. ACU was featured as one of the fastest growing Christian universities in America by the Council for Christian Colleges and Universities. In the last decade ACU has nearly tripled enrollment, increased net assets seven-fold and quadrupled annual net revenues. As the result of ACU’s achievements, President Munsil was selected by Arizona Business Journal as one of its Leaders of the Year 2020 for Education.

In 2006, in his only run for political office, Munsil won the Republican nomination for Governor of Arizona, entering the race late and coming from far behind to upset the most famous name in Arizona political history – Goldwater – while receiving more than 51 percent of the vote in a four-way primary. In the general election, he received more than half a million votes but lost to incumbent Gov. Janet Napolitano. In 2016 he was elected a delegate to the Republican National Convention and was voted by the Arizona delegation as a member of the Platform Committee.

Munsil served for a decade as Founding President and General Counsel for The Center for Arizona Policy, a nonprofit, nonpartisan public policy organization. He presided over CAP’s rapid growth into one of the largest and most powerful state public policy organizations in the United States. For his work on behalf of children, families and biblical truth, he has received awards and commendations from Focus on the Family, American Family Association, National Family Legal Foundation, Arizonans for Home Education, the National Association for Marriage Enhancement, Center for Arizona Policy and other organizations. Prior to joining CAP, for more than a decade he trained prosecutors and city attorneys, testified before legislatures and city councils as an expert witness, authored one book and co-authored another, and drafted legal briefs to courts including the United States Supreme Court to help protect children, families and communities from child pornography, sexual exploitation and abuse of women, and the negative effects of sexually oriented businesses.

Munsil earned his Juris Doctor from Arizona State University’s Sandra Day O’Connor College of Law, and has been admitted to practice in state and federal courts since 1988. He served a judicial clerkship for the Honorable Daniel Manion of the United States Court of Appeals for the 7th Circuit. He earned his Bachelor’s Degree from the Walter Cronkite School of Journalism and Telecommunication, where he was named Outstanding Journalism Graduate and served as Editor in Chief of ASU’s daily newspaper, the State Press. He began his writing career as a sportswriter for the Scottsdale Daily Progress from 1981 to 1985. He was selected the Rocky Mountain Collegiate Press Association’s Journalist of the Year in 1983, winning a live, 6-hour writing competition against hundreds of top collegiate journalists from more than 20 western states. He is a 1997 inductee into the Scottsdale Community College Journalism Hall of Honor.

Len and his wife Tracy have eight adult children and thirteen grandchildren. Dr. Tracy Munsil is the Executive Director of the Cultural Research Center, Editor of Arizona Christian University Press, and an Associate Professor of Political Science at Arizona Christian University. She is former Chair of the General Education Department at ACU, chaired the committee to create the ACU CORE liberal arts curriculum, and developed dozens of Political Science and Humanities courses at ACU. She is Chair of the Board of Directors for Voices for the Voiceless, a next-generation pro-life organization based in Phoenix. Like her husband, she is a former Outstanding Journalism Graduate at ASU, and Editor of the State Press. She home educated for 14 years. She was appointed by Arizona Gov. Doug Ducey and confirmed by the Arizona Senate as a member of the Arizona Commission on Appellate Court Appointments for two terms, beginning in 2015.

Office of the President