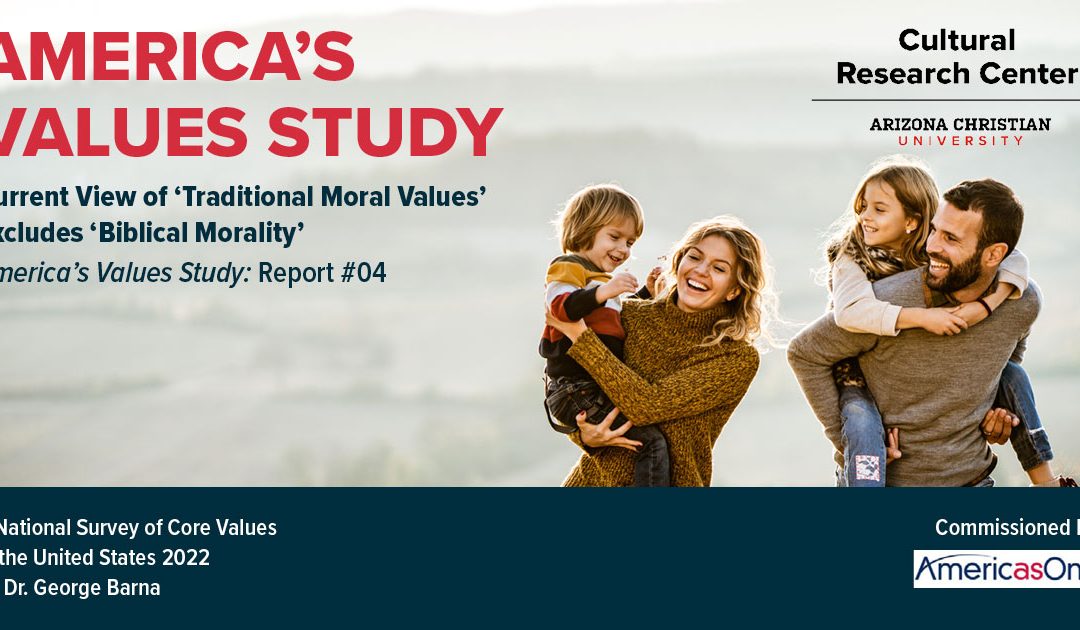 With the midterm election just days away and the nation in the midst of a battle for the values and morals that will define its future, a new survey from the Cultural Research Center at Arizona Christian University notes that a clear majority of American adults overwhelmingly profess to support traditional moral values.

The America’s Values Study, directed by Dr. George Barna, reveals that millions of Americans may embrace the idea of “traditional moral values,” but they reject the underlying historical foundation of God and the Bible as the source of these values.

Although the research found 71% of adults claim to support “traditional moral values,” it also showed that less than half of those who endorse this view indicated they consider biblical morality to be one of their personal values.

Rather than pointing to the Bible as the best source of morality, the findings show that 42% of Americans instead say “what you feel in your heart” is the surest moral guide for life, with young people (18 to 29) most likely to look to their feelings when it comes to morality.

In other words, most Americans now contend that human beings rather than God should be the judge of right and wrong, according to the survey commissioned by AmericasOne and conducted by the Cultural Research Center. Included among “traditional moral values” are: integrity, justice, kindness, non-discrimination, trustworthiness, free expression, property ownership, individual growth, and self-control.

Barna said the research points to a significant and historic shift occurring in American morality, one that shifts the task of defining morality from churches to the government.

“Americans have become comfortable with the idea of being the arbiters of morality,” Barna said. “In the same way that most Americans now contend that there is no absolute moral truth, they also now believe that there is no divine guidance required or even available to define right and wrong.”

Barna continued, “The research indicates that people are now more likely to take their moral cues from government laws and policies than from church teachings about biblical principles.”

According to ACU President Len Munsil, the findings pose a significant challenge in a nation historically defined by traditional moral values rooted in biblical principles.

“Our nation’s moral, political, and cultural framework was founded firmly in the knowledge of and reliance upon God’s truth,” Munsil said. “We still have the framework, but we no longer recognize its source.”

“This is a precarious place to be as a nation. We know from Scripture that nations are blessed when they rely on God,” Munsil said. “Our nation is running on the fumes of its biblical foundation.”

Munsil explained, “The challenge before us is how to reinfuse our nation’s long-held traditional moral values with the truth and power of God. This shift in our nation’s understanding of morality points to the critical need to expand the biblical worldview, in the next generation, our families, and our communities.”

When asked to identify the nation’s most appropriate determinant of right and wrong, regardless of people’s religious faith, 42% suggested that “what you feel in your heart” is the best guide, compared to 29% who said we should base morality on majority rule and an equal number (29%) who look to principles taught in the Bible.

Among the subgroups for whom a majority believe that personal feelings would serve Americans best as the arbiter of right and wrong were those who have no religious affiliation (53% opted for emotions as the determinant of right and wrong), people whose priority values for life are happiness, comfort and equality (51%) and self-identified LGBTQ adults (50%).

Subgroups boasting a majority who listed the Bible as their main source of determining right and wrong were typically either politically or spiritually conservative. Those segments were SAGE Cons (66% of adults who are Spiritually Active, Governance Engaged Conservative Christians), adults who possess a biblical worldview (66%), people who attend an evangelical church (62%), Republican conservatives (58%) and theologically-defined born-again Christians (54%).

America’s Values Study: A National Survey of Core Values in the United States 2022 is based on two nationwide surveys commissioned on behalf of  AmericasOne and conducted in July 2022 to identify key beliefs among American adults.