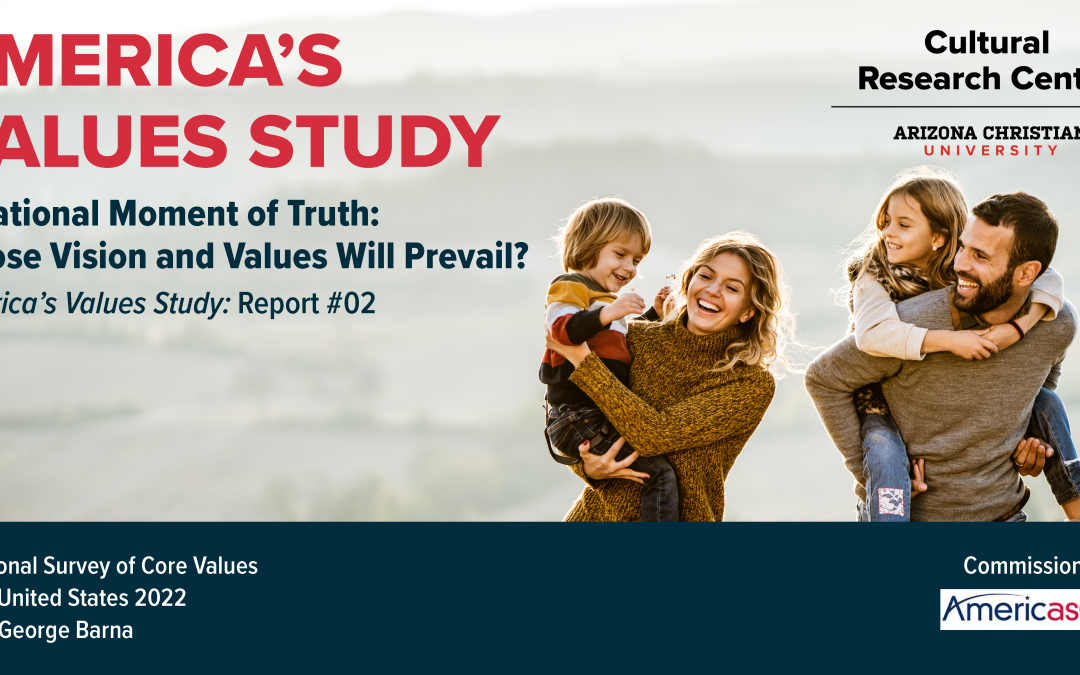 New research shows that Americans are clear on what they want when it comes to the nation’s political leaders and government—and it’s not business as usual.

Instead, the findings underscore a popular desire for the United States to restore an emphasis and reliance on a more conventional sense of personal character, traditional values, and basic democracy.

Specifically, as the midterms draw near, American adults say they desire leaders of integrity, who are dedicated to serving the people and the good of the nation, rather than themselves. And when it comes to the kind of government they want, Americans seek stability rooted in Constitutional principles and freedom for people to live and raise their families as they choose.

The new findings from the America’s Values Study, conducted by the Cultural Research Center at Arizona Christian University and George Barna, show an America that is united in its desire for an end to political polarization and infighting, and that is fed up with leaders who push policies that don’t represent the values of the people.

According to the America’s Values Study, commissioned by Marc Nuttle on behalf of AmericasOne, large majorities of American adults are united around a number of key common-sense core values:

According to Arizona Christian University President Len Munsil, despite seemingly increasing division and discord in the nation, the America’s Values Study identifies significant areas of common ground among the American people.

“We believe it points to widespread unity on fundamental values such as the importance of family, the desire for integrity among our leaders, for civility and kindness in public discourse, a strong military, a commitment to religious freedom and limited government, ” Munsil said. “These shared, common-sense values can provide a path forward for our great nation.”

According to Barna, CRC Director of Research and creator of the study, “The people hunger for political officials and systems to serve the people rather than the leaders themselves.”

Barna continued, “The policy prescriptions the people seek are those that protect families and display decency and consistency. They want control over their own lives rather than ceding that authority to the government. They envision a nation of which they can be proud because it stands for the same things they personally care about and work to promote.”

But Americans must be willing to work to secure the values they say they prefer, Barna explained. “To restore the heart of the nation according to the values of the people will take a willingness to get more deeply involved and to reject the unpalatable vision that the major parties and most powerful political leaders are foisting upon the people,” he said.

The study also looked closely at the preferences of American adults when it comes to their government. According to the study, a consistent, substantial majority of between two-thirds to three-quarters of adults identified what their ideal government would look like. Among those traits were:

According to Nuttle, founder of AmericasOne, “The America’s Values Study is unique in its breadth and insight into the American character. The results will certainly be relevant through the 2024 election, and can serve as a benchmark for measuring how well we are identifying leaders who really understand the heart of the people.”

Nuttle said, “Regardless of who wins the midterms, many of the issues on American’s minds today will be the same issues that must be addressed in the next Presidential cycle—and these research findings provide a pathway forward. Citizens must now, more than ever, stand up to protect values in which they believe if they want America to lead the world. The authority to lead their own families as they see fit is at stake.”

An earlier report based on the same survey revealed that the dominant, core value of Americans is family. Eight out of 10 adults said they are willing to fight or even die to protect and preserve their family and the place of the family in society, or to sacrifice personal resources to retain the centrality of family in our nation.

In addition to advancing the best interests of family, other core values included their pursuit of happiness; personal character and goodness; opportunities for personal growth and expression; freedom, independence, and justice; and stability and trust. The report also underscored the widespread interest in moderation and stability rather than radical, continual cultural and structural change, or policy extremes.

America’s Values Study: A National Survey of Core Values in the United States 2022 is based on two nationwide surveys commissioned on behalf of AmericasOne and conducted in July 2022 to identify key beliefs among American adults.

The full report by George Barna, America’s Values Study: “Report #02: A National Moment of Truth: Whose Vision and Values Will Prevail?” is available here.