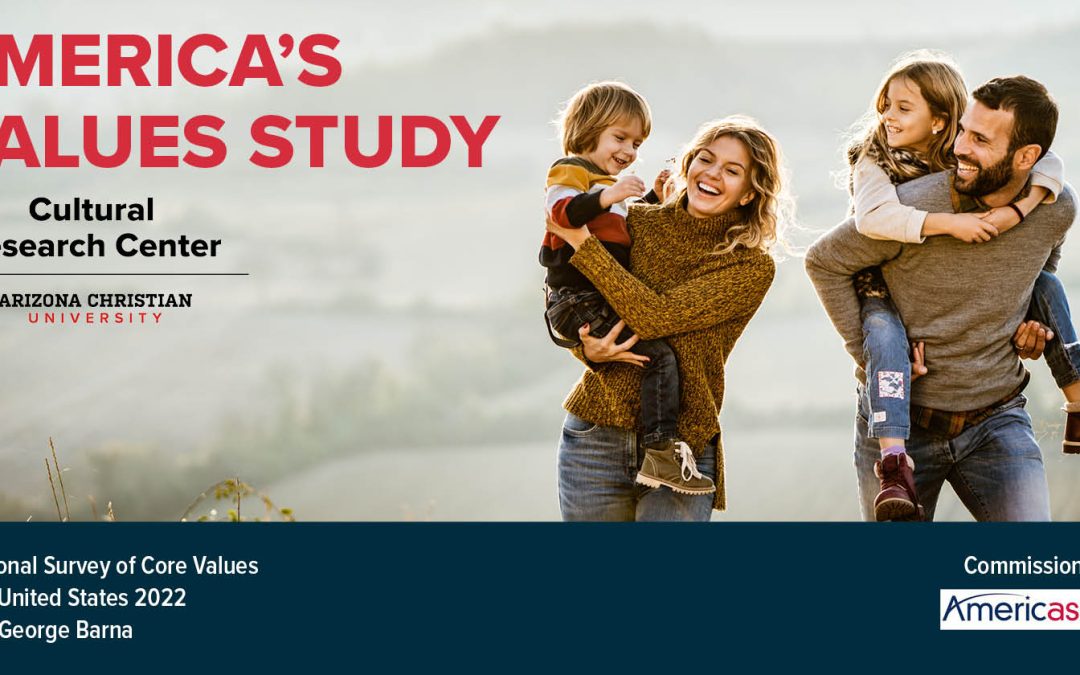 With midterm elections just weeks away, new research suggests that Americans may not be as divided as is widely believed—at least not when it comes to the values they cherish most.

The America’s Values Study, conducted by the Cultural Research Center at Arizona Christian University and commissioned by AmericasOne, evaluated four dozen different values to determine what Americans say defines them and their life. The results revealed considerable common ground—starting with the importance of the family.

Taken as a whole the findings paint a very different portrait of Americans—one that shows considerable unity, rather than division and polarization—in the things we say matter most.

In fact, the number one core value that emerged from the 48 unique values was family, with 61% of adults saying “family” is a value for which they would be willing to fight or even die to protect or preserve. An additional 19% said they would be willing to sacrifice personal resources for their family, totaling 80% of Americans who consider family to be a core value—something that defines them and their life.

The next most important value identified in the research was happiness.  Thirty-five percent (35%) of American adults said they would be willing to fight or die to preserve their happiness, and a similar proportion (37%) was willing to sacrifice personal resources to maintain their happiness  In total, 72% identified happiness as a core value.

This America’s Values Study is the first of two nationwide surveys commissioned by AmericasOne founder Marc Nuttle. According to George Barna, CRC Director of Research and creator of the study, the findings may have identified a pathway for America’s leaders to follow that will restore hope, trust, and unity.

“The pattern of preferred values embraced by Americans indicates that perhaps the prevailing narrative about who we are is inaccurate,” Barna said. “Maybe we are, at our base, neither Democrat nor Republican, neither left nor right. The research says we still have a great deal in common.”

ACU President Len Munsil noted that the research offers tremendous hope for cultural transformation in our nation, identifying many places of common ground and shared values where people of faith can connect and influence culture.

“Even though the culture seems divided, this new research shows so many areas of consensus among Americans,” Munsil said. “We’re far more united than we think, especially when it comes to our commitment to family.”

According to Munsil, “This new research gives us a better sense of who we are and what unites us as a nation – and unsurprisingly given our nation’s historic biblical foundations, many of our core values align with Scripture and the Christian faith. By identifying common ground, we see opportunities for engagement and sharing what matters most—especially promoting the family in our culture.”

According to the report, the picture that emerges from the research is of a nation in which people are seeking moderation rather than extremes, including in areas of government, morality, and lifestyle choices. The values that tested as least important included unconstrained sex, uncensored entertainment, universal empowerment, public recognition or fame, convenience, unrestrained choice, and winning.

Also among the list of least compelling values were cultural diversity, economic equality, and tolerance—values portrayed most often in media and entertainment  as most significant.

Overall, Barna says, the results represent a path forward, for leaders paying attention, that could restore hope, trust, and unity.

“While the data show that no two population groups in the United States have exactly the same values profile, it also reveals a startling consistency in the ranking of the importance of core values across dozens of population subgroups,” Barna said.

“Emphasizing what we share in common is what will break down barriers between groups and provide a sense of common cause,” Barna said. “But it’ll take bold and honest leaders to set aside ideological distinctives in favor of points of agreement.”

AmericasOne founder Nuttle agreed: “The authority of the family as the essential foundational element that secures the stability of society in the United States is the essence of what defines us as Americans. Empowerment of the family unit should be the objective of every elected official.”

A lawyer, author, consultant, and businessman, Nuttle has represented and advised Presidents of the United States, leaders of foreign countries, state officials, and corporations. He has worked on government policy and is an expert at understanding, analyzing, and predicting economic and cultural trends.

The America’s Values Study is a national survey of the core values of American adults, based on a pair of companion surveys commissioned by AmericasOne that were conducted in July 2022.

It was commissioned on behalf of AmericasOne, a community of values-driven individuals who are seeking to grow their families and businesses and would like to share their ideas and challenges in a supportive and trusted environment. AmericasOne is committed to equipping and engaging individuals and families who want meaningful, thoughtful reform that puts principles, not politicians, first. Members get the resources needed to advance the cause of freedom, free economic choice, and the core values that make America exceptional.

For more information on AmericasOne and the America’s Values Research project, visit www.AmericasOne.com