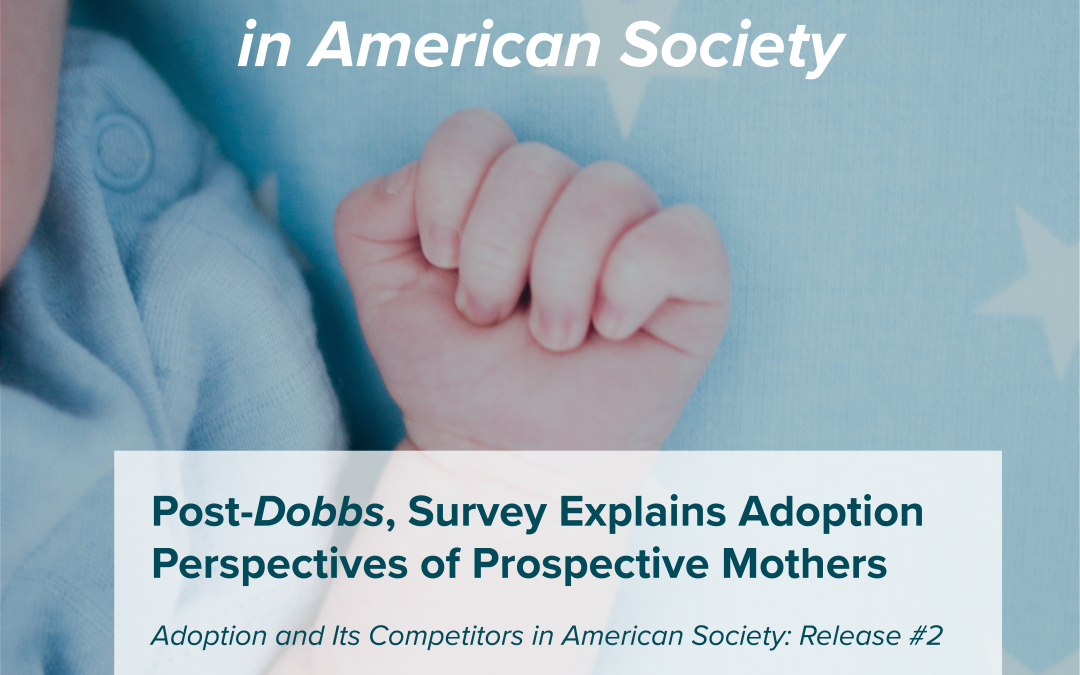 With the Dobbs v. Jackson’s Women’s Health Organization decision from the U.S. Supreme Court returning the question of abortion to state and local levels, understanding what motivates women to make a decision about how to handle a pregnancy—especially views of adoption—is even more significant.

A national adoption study from veteran researcher George Barna and the Cultural Research Center at Arizona Christian University asked women of prime childbearing age (15 to 44) about the most sought-after and powerful influences on their decision-making regarding pregnancy.

These latest findings show that women of childbearing age are mostly likely to go to family, medical professionals, and friends for counsel when facing an unexpected pregnancy. Of the possible options for seeking advice, church and religious leaders ranked seventh behind making the decision alone or contacting Planned Parenthood.

Specifically, the study showed that the primary sources of information are family (41%), medical professionals (34%), and friends/peers (25%), followed by counselors or psychologists (20%), no one (20%) and Planned Parenthood (17%). Church and religious leaders were seventh on the list at 12%.

The study found that the top considerations were the perceived best interests of the child (45%) and financial considerations (28%). Teenage women (15-19) were much more likely than older women to acknowledge the influence of whether they have the personal maturity to raise a child, according to the study.

As for how much weight the various influences carried in a woman’s decision on whether to raise, adopt or abort their child, “religious beliefs and convictions” were the fifth-most important factor among those surveyed (15%) and somewhat surprisingly, third among self-identified Christians, according to the study.

ACU President Len Munsil said the research provides invaluable insights into who American women trust and where they go for information when making a decision about an unexpected or unwanted pregnancy,.

“One of the key insights from this research is the importance and influence of the community surrounding young women,” Munsil said.

“As women seek out advice and counsel in the wake of the Supreme Court opinion, it’s important that medical professionals, as well as church and community leaders, are equipped to share a biblical view of the value of human life and the option of adoption,” Munsil said. “Dobbs opens so many doors for sharing the message of life with young women around us.”

“And it’s a great opportunity for us at Arizona Christian University to continue to develop a biblical worldview in our students, so they have a strong foundation for promoting life to the first post-Roe generation” Munsil said.

“This research provides valuable insight into who is influencing women. We know family members are the strongest influence on women across all ages,” Knox said. “But perhaps surprisingly, we learned that, for many women, doctors and medical professionals have a greater influence than friends and peers.”

He continued, “Young women are also heavily influenced by counselors and psychologists. This tells us that we should do more to equip medical and mental health professionals to understand fully the benefits of adoption so  they can provide the most accurate, helpful information to the women they serve.”

Knox said that the Opt Institute is committed to educating and supporting the advisors women trust.

“While adoption has always been an option for women, the Supreme Court’s decision has many people talking about the choices women have when facing an unplanned pregnancy,” he said. “Those of us who have been touched by adoption have experienced what a life-giving and positive choice it is, and this moment in history provides us with the opportunity to share that message with others.”

The study noted that there is no single information source that has substantial influence on women’s opinions about adoption. When the sample of women of childbearing age was asked to indicate how much influence each of 10 sources had on their own attitudes related to adoption, only one source was said to have “a lot” of influence by at least one out of every four women—family– listed by 28%. Their personal religious leaders ranked second, with 22% of women claiming those leaders had a lot of influence on their thinking about adoption.

The study found significant differences related to the age and religiosity of the woman.

Teenage women were likely to seek out a greater number of sources than were their older counterparts. According to the study, teen women were also the age group most likely to gather insights from family (51%), friends (40%), doctors and other medical professionals (36%), counselors and psychologists (30%), books and other materials (17%), and abortion clinics (12%).

The outlook changes dramatically as women age. The study found that women in their 30s and 40s were the most likely to make a decision without seeking outside counsel of any type (27%). Those who would pursue external guidance were most likely to rely upon family (39%), doctors and medical professionals (30%), friends (20%), and counselors or psychologists (16%). Once a woman reaches her 40s, she is highly unlikely to seek input from abortion, adoption, or government organizations, or from books and other materials.

When it comes to religious views, the study found that women with a biblical worldview were far more likely than other women to rely upon their church and religious leaders (51% compared to 9% of all other women). Similarly, women associated with the Christian faith were more likely than woman aligned with a non-Christian faith or with no faith at all to lean on church and religious leaders (18% vs. 11% vs. 1%, respectively), and family members (46% vs. 37% vs. 33%, respectively). Women who self-identified as Christian were half as likely as other women to seek advice from abortion clinics (6% vs. 12%), according to the study.

Knox said the research points to an important role for church and religious leaders following the Supreme Court decision. “Adoption is a sacrificial, loving option that’s surprisingly not talked about in most churches,” he said. “Too many churches are afraid of getting political. But now with Roe v. Wade being overturned, the church has a wonderful opportunity to lead and reintroduce adoption back into the conversation.”

“This research shows more education needs to be done to support women who are facing an unintended pregnancy,” Knox said. “The church needs to be prepared to be a voice, especially to teenagers who are caught off-guard by pregnancy, and encourage adoption. Helping women see they have three options (not two) is transformative.”

The latest release of key findings from Barna, CRC Director of Research, in the report, “Post-Dobbs, Survey Explains Adoption Perspectives of Prospective Mothers,” is available here. The full research study, Adoption & Its Competitors: Results of a National Survey Regarding Adoption in the U.S. in 2022, also by George Barna, is available here.