Basic Biblical Beliefs Lacking Among Most Pastors in All U.S. Denominations, All Church Roles 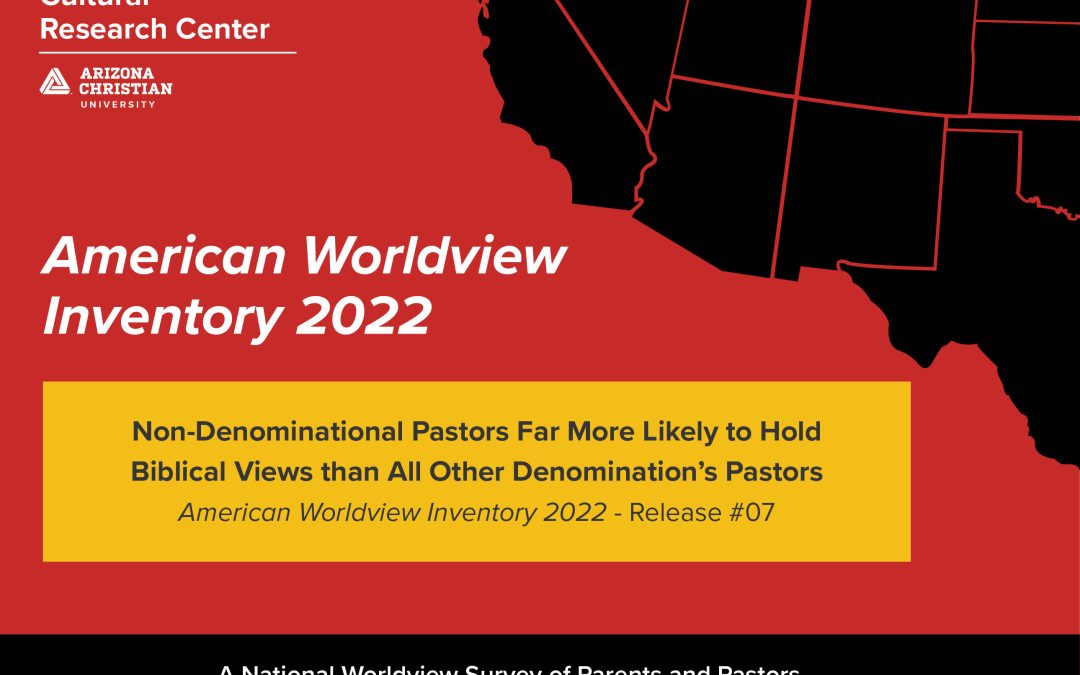 New research shows a stunning lack of basic biblical beliefs among Christian pastors across all U.S. denominations, according to veteran researcher George Barna and the Cultural Research Center at Arizona Christian University.

An earlier report from the American Worldview Inventory 2022 showed that just 37% of Christian pastors have a biblical worldview, with the predominant worldview among pastors (62%) being syncretism, a hybrid mixture of disparate worldview elements blended into a customized philosophy of life.

According to this latest report, the widespread absence of biblical worldview among American pastors is resulting in eroding beliefs in areas as basic as salvation through Jesus Christ, the nature of God, the sinful condition of human beings, and the existence of objective truth.

As Barna notes, “Our survey demonstrates that large numbers of pastors have abandoned even the most basic and hallowed biblical teachings for ideas that now permeate our culture.”

And this has enormous negative consequences for American Christianity, according to Barna.

“Because pastors teach what they believe, many churches are becoming centers of syncretism and secular thought,” he said. “Perhaps without even realizing it, thousands of pastors have become leaders of a movement away from God.”

“With so many churches and their pastors in the culture’s grip, rather than fervently committed to serving God and teaching His word,” Barna explained, “you can clearly see why most church-going Christians are being more influenced by the culture than the culture is being influenced by America’s Christians.”

ACU President Len Munsil noted that the findings point to the need for a renewed commitment within the church, and especially among Christian colleges and universities, to focus on the basics of the faith.

“Obviously, we can’t assume that this next generation has a solid understanding of biblical basics,” Munsil said. “They’re incredibly influenced by culture, and now the research shows us that church youth groups are often led by pastors who lack basic biblical understanding. At ACU, we’re committed to helping our students develop a biblical worldview and deepening their biblical beliefs to guide how they live their lives.”

This latest report from the AWVI 2022 looks at 17 basic beliefs, including salvation through Jesus Christ, moral and biblical truth, human purpose, the value of human life, and other foundational biblical issues, among pastors in the nation’s seven major denominational groupings.

The report found that pastors serving non-denominational and independent Protestant churches were by far the most likely to embrace basic biblical principles. Lowest levels of biblical belief were found among pastors of holiness and traditionally black churches.

Surprisingly low numbers of biblical beliefs were held by pastors in evangelical churches. Amazingly, given the biblical foundations of evangelicalism, three out of every 10 (30%) do not believe that their salvation is based on having confessed their sins and accepted Jesus Christ as their savior. According to the report, more than one-third believe that there is no absolute moral truth, deny that human life is sacred, and say that having faith matters more than which faith you have.

The report also found an unexpectedly large percentage of pastors, regardless of their title or position or denominational affiliation, reject biblical teaching on a wide range of issues.  The least biblically centered pastors, by a substantial margin, are those who serve as executive pastors, teaching pastors, and children’s or youth pastors.

Although 41% of senior and lead pastors have a biblical worldview (the highest among all pastoral positions), unexpectedly substantial proportions hold beliefs that are in conflict with the Bible on a range of teachings.

Specifically, the report found that one-third or more of senior pastors believe:

Additionally, one-third or more of senior pastors reject the following beliefs: human life is sacred; wealth is entrusted to individuals to be managed for God’s purposes; success is consistent obedience to God; people are born into sin and can only be saved from its consequences by Jesus Christ; they, personally, will experience eternal salvation only because they have personally confessed their sins and accepted Jesus Christ as their savior.

The full report from the American Worldview Inventory 2022, “Release #7: Non-Denominational Pastors Far More Likely to Hold Biblical Views than All Other Denomination’s Pastors,” is available here.