Only Half of Evangelical Pastors Hold Biblical Worldview; Even Lower in Most Denominations 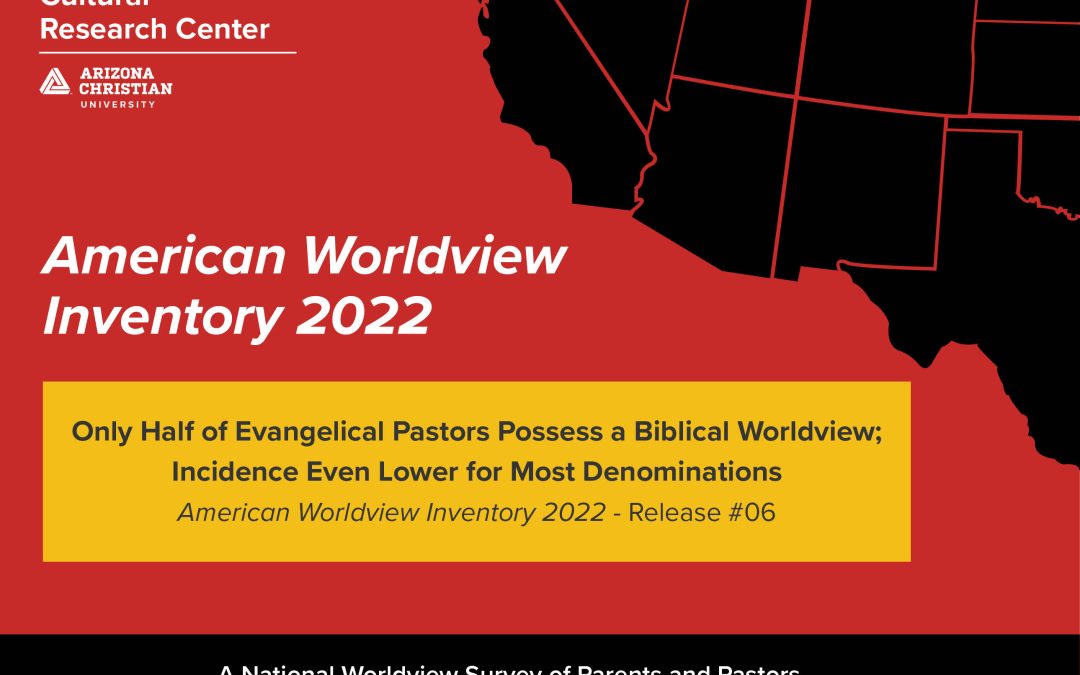 Barely half of evangelical pastors—only 51%—have a biblical worldview, and the levels are even lower in other denominations, according to the latest research from the Cultural Research Center at Arizona Christian University.

This new research reveals that many American pastors are proving to be incapable of resisting the pressure of cultural influences when it comes to worldview. Instead, it appears that the nation’s pastors are in fact doing what they believe, but those beliefs are simply not in harmony with biblical teaching.

A previous release of American Worldview Inventory 2022  data from veteran researcher George Barna showed that just 37% of all Christian pastors have a biblical worldview. The alarming findings were dismissed by some as unsurprising given the degree of “wokeness” that has invaded Christian churches.

But seeing the low levels of biblical worldview among pastors in evangelical churches, which by definition believe that the Bible is God’s true and reliable words to humanity, is particularly shocking, according to Barna, CRC Director of Research.

With respect to other denominations, the research found that biblical worldview levels are slightly higher among pastors of non-denominational and independent churches (57%), but are even lower than the evangelical norm among pastors of mainline Protestant, Catholic and other categories of churches.

So, when it comes to pastors’ levels of biblical worldview, the study found that smaller is better.

Overall, 41% of the pastors of churches that average 100 or fewer adults at their weekend services are Integrated Disciples—i.e., have a biblical worldview, having successfully integrated their biblical beliefs into their daily behavior. The numbers were best among the churches that attract 101 to 250 adults per weekend; 45% of those pastors have a biblical worldview. In this post-pandemic era, about nine out of 10 Christian churches in the United States has 250 or fewer adults attending on a typical weekend.

ACU President Len Munsil noted the connection between the spiritual crisis in the church and these new findings regarding worldview and pastors.

“We’ve spent the past two-plus years studying the rapid decline in biblical worldview levels among American adults, and now we see this latest study showing how low it is even among American pastors,” Munsil said. “We’re at a whole new crisis point, given that we now have stark evidence that many pastors no longer embrace biblical beliefs and behaviors.”

Munsil continued, “We are in desperate need of a wholesale revival and awakening in America – and as always in history and in Scripture, it must begin with us – the church.”

The veteran researcher shared a key takeaway from the research: When it comes to churches, “don’t assume” churches are doing things right in this area. “Very few churches are getting the job done,” he said.

“It’s not a good idea to just drop kids off at these programs,” Barna said. “It’s important for parents to know what’s being taught in children and youth programs, rather than assume kids are learning the biblical worldview.”

The American Worldview Inventory 2022 Release #06: “Only Half of Evangelical Pastors Possess a Biblical Worldview; Incidence Even Lower for Most Denominations,” ” is available here.