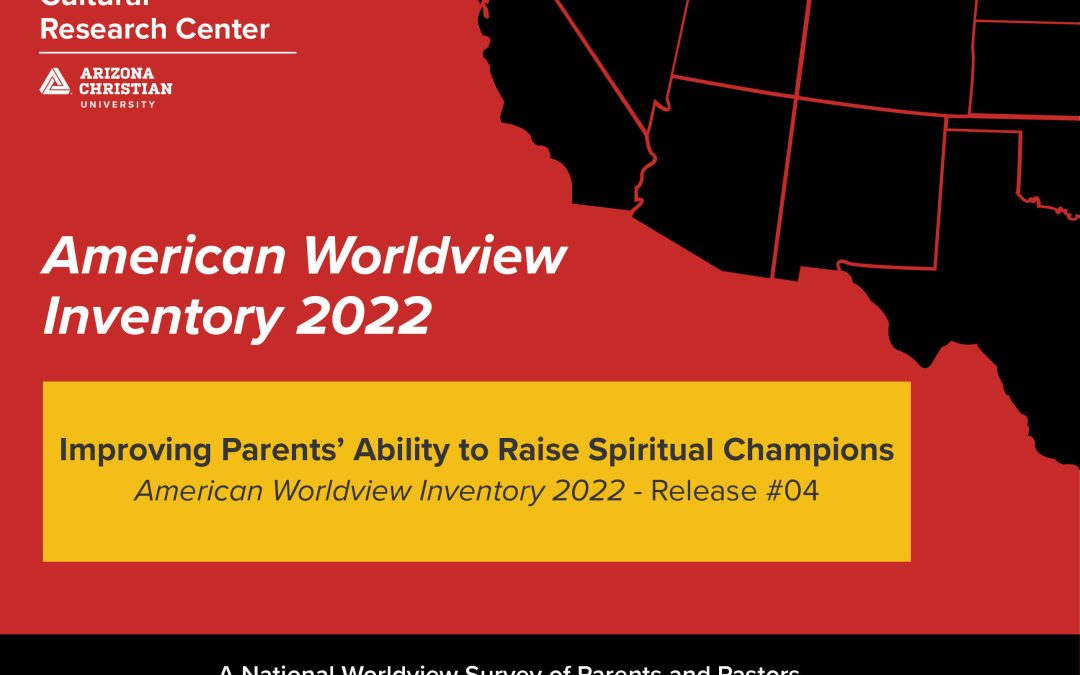 Even though biblical understanding among U.S. parents today is at a historic low—only 2% have a biblical worldview—new research suggests that targeted worldview development among born-again Christian parents could dramatically increase faith-based parenting within American families.

New research indicates that about one out of every five parents (22%) is a theologically defined “born-again” Christian. These parents of children under 13 are above average in their spiritual commitment and are often considered the spiritual backbone of local churches, according to the latest findings the American Worldview Inventory 2022 from the Cultural Research Center at Arizona Christian University.

When looking at parents who do have a biblical worldview, eight out of 10 (79%) are among those who are considered born-again Christians, according to veteran researcher and CRC Director of Research George Barna.

In other words, born-again parents are the most likely of any faith segment raising children today to embrace a biblical worldview. And the research shows that efforts to strenthen the worldview within this group could better enable today’s parents to share their Christian faith with their children.

The research specifically identifies a number of errant worldview beliefs and behaviors held by this group that churches and other organizations can target to begin improving the biblical worldview of parents.

Barna is hopeful that these findings from the AWVI 2022 can help refocus efforts to support the spiritual growth and parenting skills of born-again parents.

“Sometimes the frenetic pace of daily life pushes us off-course, especially since few churches apply valid and consistent measures to evaluate how effectively parents are raising their children,” Barna explained.

“By reasserting the biblical priorities on which to focus, it becomes more likely that churches can guide the parents they influence to develop a biblical worldview in their own life, and then be capable of passing that on to their children,” he said.

“This research points the way to helping parents raise spiritual champions,” Barna said. “Only with a fully developed biblical worldview is this type of parenting possible.”

ACU President Len Munsil agreed. “This report is great news, because it gives clear guidance to address the loss of biblical worldview among today’s parents.”

Munsil continued, “Armed with this kind of targeted research, the church and parachurch ministries can focus on changing the troubling trends we’ve seen in biblical understanding among American parents today. Now we know that many of the most committed Christian parents – who undoubtedly want to raise their children in the ‘nurture and admonition of the Lord’ – need to be shored up in their own understanding of biblical truth so they can provide it effectively to their children.”

Newly released findings from the AWVI 2022, collected from a representative national sample of parents of preteens, found that those who are theologically defined born-again believers are more likely than other faith groups to describe themselves as deeply committed to their faith (78% versus 44%), to engage in spiritual practices regularly, and to possess some core biblical beliefs about God and the Christian faith.

Although only 8% of born-again parents of preteens have a biblical worldview—that’s four times higher than among Millennial parents in general. And it presents an opportunity for moving them toward biblically based parenting.

The key, according to Barna, is to shift theologically defined born-again parents from their dominant worldview (Syncretism) to biblical theism (i.e., the biblical worldview).

Barna said the research points to ways that rather than embracing Syncretism (a hodgepodge of views and philosophies absorbed from the culture around them), these parents could instead develop a coherent set of beliefs and behaviors consistent with the biblical worldview.

The new report identifies five errant beliefs and behaviors that, if changed, could dramatically improve the levels of biblical worldview among born-again parents:

As the report notes, each of these beliefs has far-reaching consequences for a person’s lifestyle and influences a wide range of personal decisions—from matters such as morality, choices regarding time use, money, abortion, health care, ministry engagement, and more.

The report also indicates other errant beliefs and behaviors that could be changed to continue to build a stronger foundation, including a biblical understanding of success, morality, the nature of sin, and other areas.

The American Worldview Inventory 2022 from the Cultural Research Center at Arizona Christian University is a worldview study of parents, undertaken in January 2022  among a national sample of 600 parents of children under the age of 13. The AWVI 022 Release #04: “Improving Parents’ Ability to Raise Spiritual Champions” is available here.