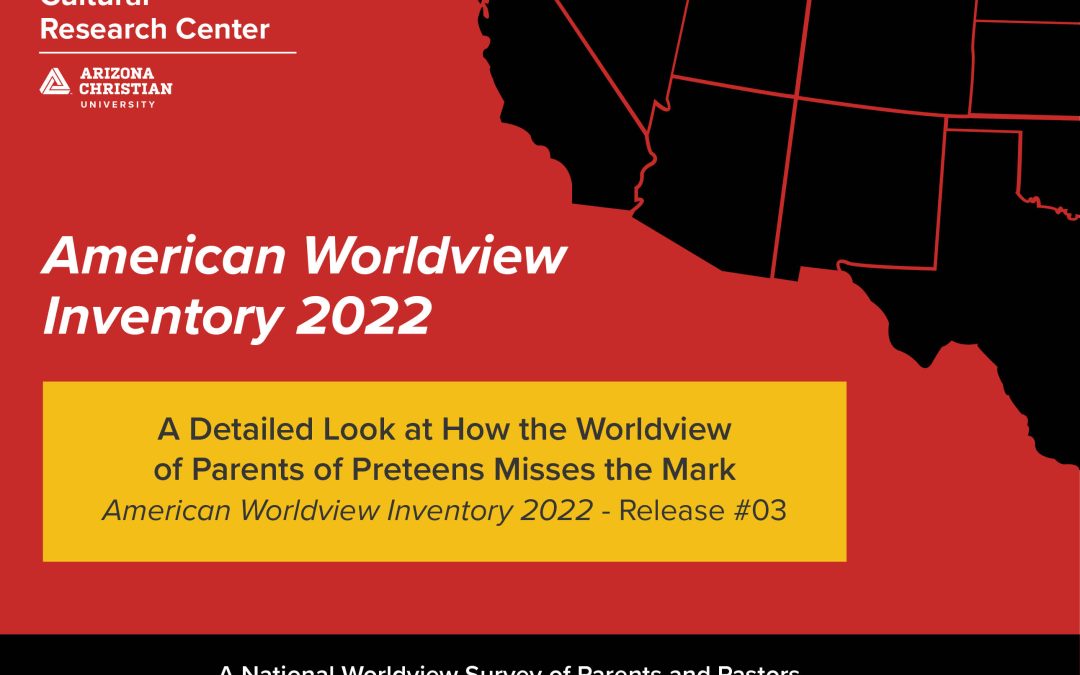 Today’s parents of preteens are in the midst of a spiritual crisis —a crisis of worldview and faith so deep that a tragic crash looms on the horizon when it comes to how parents are raising the next generation.

The warning signs of this impending parenting crisis are “identifiable and unmistakable,” according to veteran worldview researcher George Barna and author of the American Worldview Inventory 2022 from the Cultural Research Center at Arizona Christian University.

Today’s preteens (up to age 13) are confused by the contradiction between their parents’ actions and lifestyles and their self-identified Christian beliefs. In fact, the AWVI 2022 identified a staggering disparity between the number of parents who claim to be Christian (67%) and those who actually possess a biblical worldview (2%).

The study’s detailed look at the worldview of today’s parents specifically identifies a fading biblical Christianity that is quickly being replaced by Syncretism, which then leads to a correspondingly fragmented approach to parenting—especially when it comes to the spiritual and moral training of the next generation.

The study defines Syncretism as a worldview that “merges otherwise incompatible philosophies of life into a made-to-order worldview that incorporates enough biblical elements to be minimally Christian in nature” has emerged as the dominant worldview among parents in America today.

This increasingly popular, commonly accepted expression of the “Christian faith” is actually a syncretistic blending of elements from numerous, unbiblical worldviews with a few biblical views. According to Barna, this new-fangled faith is a form of Christian nominalism, rather than an authentic faith rooted in a foundation of biblical truth.

“It appears that parents, as well as their support system (churches, extended family, and parachurch ministries) are too distracted or disinterested to acknowledge and address this parenting crisis. I fear that a  tragic crash is in store,” said Barna, CRC Director of Research and author of the AWVI 2022.

According to ACU President Len Munsil, these latest findings are an urgent call for better biblical worldview education across our nation. “Making sure Americans, especially parents, are equipped with a biblical worldview is more important than ever,” Munsil said.

“It’s clear that our nation’s parents deserve better encouragement and tangible resources for raising their kids. Biblical worldview—knowing and applying God’s truth in every area of life—is key to this transformation.”

“This latest research goes to the roots of our nation’s spiritual crisis,” Munsil noted. “It clearly shows we’re at a tipping point. We desperately need spiritual revival based on biblical truth—in our churches, in our families, in our schools and universities—in every area of our culture.”

The latest AWVI 2022 findings show that the consequences of worldview discrepancies and fragmentation are beginning to manifest among our nation’s children.

As Barna stated, “Data shows that the disinterest and even disrespect many children show to their elders is partially a reaction to the lack of authenticity they experience in the presence of parents, teachers, pastors, and other cultural leaders. Children often feel justified ignoring adults whose talk and walk are inconsistent.”

The results of this are troubling for the future of the church. Barna explained, “When they’re exposed to teaching—through words or actions, whether formal or informal—that is contradictory, children naturally conclude that the Christian faith is inherently contradictory and therefore may not be what they are seeking as a life philosophy.”

The latest AWVI 2022 report details the glaring discrepancies between parents’ self-identified Christianity and what they actually believe:

When it comes to actually living out their self-proclaimed Christian faith, among parents of preteens who do actually believe in the God of the Bible—one out of four does not bother to praise, worship, or thank God during a typical week.

The American Worldview Inventory 2022 from the Cultural Research Center at Arizona Christian University is a national worldview study of parents, undertaken in January 2022  among a national sample of 600 parents of children under the age of 13. The AWVI 2022 Release #03: “A Detailed Look at How the Worldview of Parents of Preteens Misses the Mark” is available here.