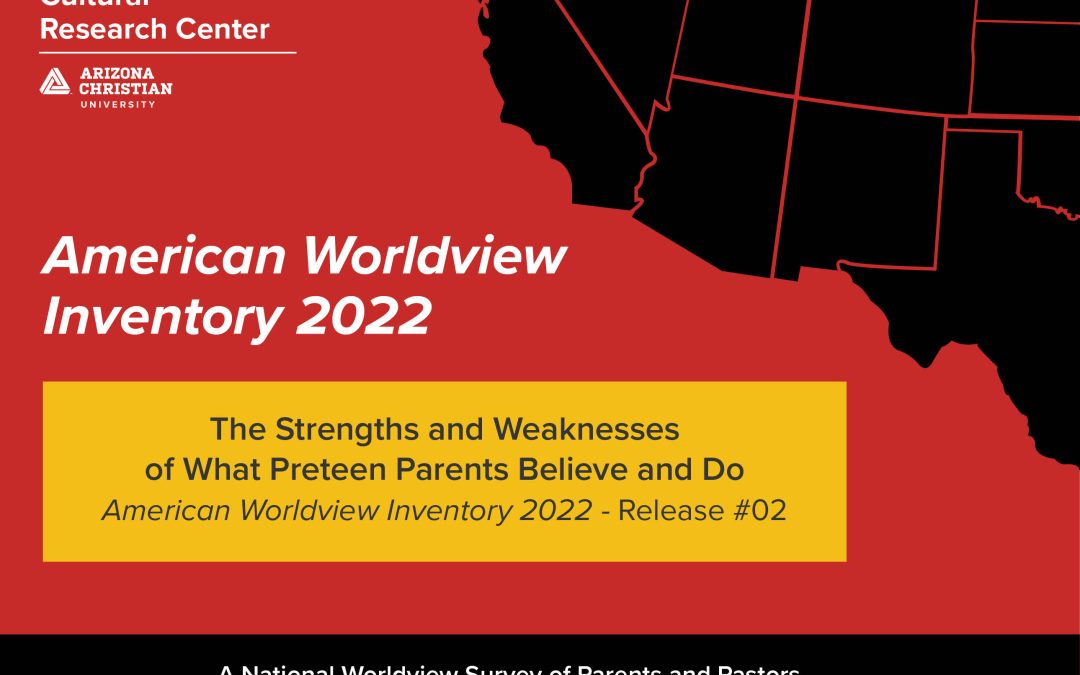 American children are very unlikely to develop a biblical worldview before they reach adulthood—thanks to their parents—who lack the foundation needed to model consistent biblical beliefs and behaviors.

Not only do today’s parents of preteens lack a biblical worldview, it’s doubtful they would seek out other individuals and experiences that would promote a biblical worldview as part of raising their children, according to new research from the Cultural Research Center at Arizona Christian University.

The new study from CRC Director of Research George Barna specifically details parents’ errant views in all worldview categories of belief and behavior, including their view of God, how they seek meaning and purpose in life, their understanding of morality, and their perception of family and the value of human life.

ACU President Len Munsil said the findings are sobering news for the next generation of children and for our nation.

“Scripture calls parents to raise their children ‘in the nurture and admonition of the Lord,’” Munsil said, “but the overwhelming majority of today’s parents are unable or unwilling to provide a biblical foundation for their children’s lives. Today’s parents need help and encouragement.”

“The consequences for our nation and the world are significant,” he said. “Biblical truth is the foundation of our civilization, and understanding what is true and how we should live is what leads to human flourishing. We must equip parents to not only provide these vital biblical truths to their children, but to live them out in their own lives.”

The AWVI 2022 research shows that 5% of parents have core beliefs that fit a biblical worldview, and 5% of parents have  behaviors that are in harmony with a biblical worldview. If they do act biblically, chances are low that they have the supporting beliefs to help their children understand those behaviors. As a result, the study shows children may be  confused by the contradictions between parental beliefs and behavior.

According to Barna, veteran researcher and author of the survey, the lack of  biblical worldview beliefs and behaviors among today’s parents presents an almost unsurmountable challenge to the education and spiritual development of American children.

“Parents are both role models and gatekeepers for their children,” Barna said.

“As youngsters watch and listen to their parents, they are likely to experience contradictions between the words and actions of their parents,” Barna said. “That’s every bit as concerning as the fact that 49 out of every 50  parents of preteens do not have a biblical worldview to share with their family.”

Barna explained, “When a child is placed upon the wrong path for their future early in life, the chances of them transitioning to a more biblical path are diminished.”

The research also revealed that the nation’s churches provide little in the way of biblical worldview training that could help parents.

For example, just 1% of  parents who attend Catholic, mainline Protestant, or traditionally black congregations exhibit consistent biblical thought and practice. Almost four out of 10 parents of preteen children (37%) attend one these churches. That’s nearly double the proportion (19%) that attend evangelical, Pentecostal, non- denominational or independent Protestant churches—which tend to have higher levels of biblical worldview among their congregants. Yet worldview levels among those attending these more biblically traditional churches are historically low.

Here are other key worldview findings from the study:

The American Worldview 2022 Release #02: “Strengths and Weaknesses of What Preteen Parents Know and Do” is available here.