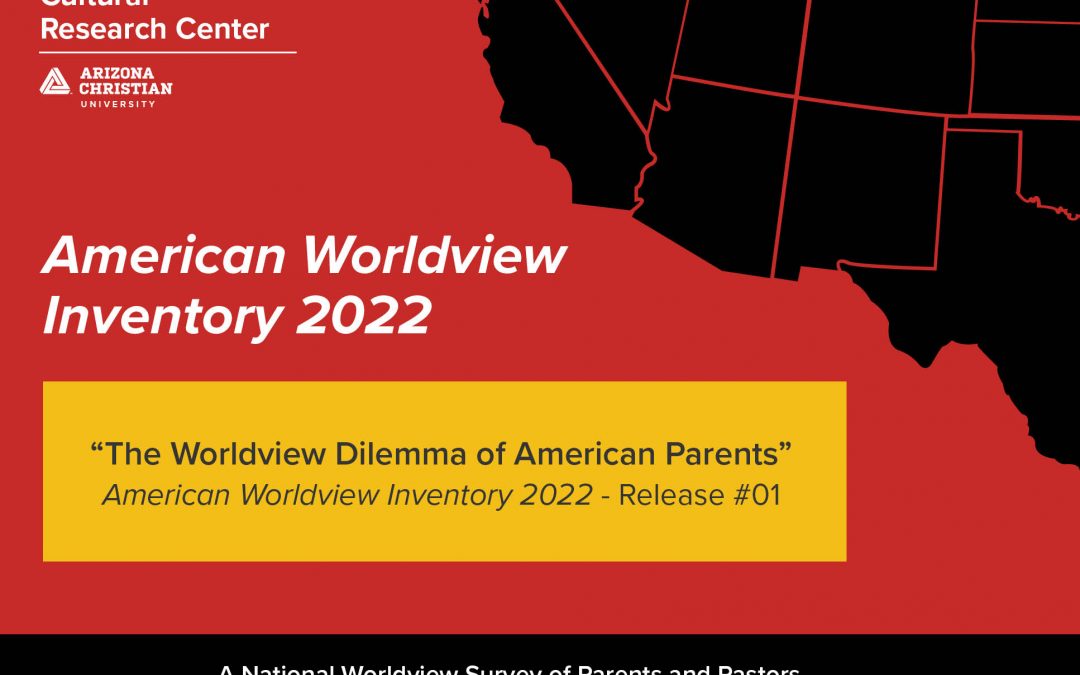 The overwhelming majority of American parents today lack a biblical worldview and a robust faith that they can pass on to their children, which could dramatically hamper the spiritual development of the next generation.

According to new research from the Cultural Research Center at Arizona Christian University, a full nine out of 10 parents of children under age 13 embrace a muddled worldview that mixes a variety of alternative life philosophies, most of which have little to do with biblical truth.

The latest findings from the American Worldview Inventory 2022, a national study of American parents conducted by CRC Director of Research George Barna, show that two-thirds (67%) of parents of pre-teens claim to be Christian, but only 2% actually possess a biblical worldview.

Considering the significant role parents play in shaping their children’s worldview, these latest findings are especially troubling and point to a larger problem when it comes to the future of the next generation of American children—especially regarding their spiritual development.

According to Arizona Christian University President Len Munsil, these findings pose significant challenges to the nation’s families and its future.

“This latest research shows us that the biblical worldview deficit will likely continue through another generation—and possibly beyond—unless there is another Great Awakening,” Munsil said. “As a nation, we need to take a serious look at the spiritual formation of the next generation of children and do all we can to support parents as they help their children navigate a culture that is increasingly devoid of biblical truth.”

“Deuteronomy 6:6-7 says ‘These commandments that I give you today are to be on your hearts.  Impress them on your children. Talk about them when you sit at home and when you walk along the road, when you lie down and when you get up,’” Munsil said.

“But CRC’s research tells us that the vast majority of parents today do not know God’s commandments, so have no ability to teach them to their children,” he continued. “Knowing how to live according to God’s word is the key to human flourishing. So, this situation is absolutely tragic.”

According to Barna, veteran researcher and creator of the AWVI 2022, these findings show that most American children begin life at a spiritual disadvantage, given the religious and lifestyle choices of their parents.

Barna noted, “A parent’s primary responsibility is to prepare a child for the life God intends for that child. A crucial element in that nurturing is helping the child develop a biblical worldview—the filter that causes a person to make their choices in harmony with biblical teachings and principles.”

“When it comes to their children’s spiritual development, parents can’t give what they don’t have,” he said. “Shockingly few parents intentionally speak to their children about beliefs and behavior based upon a biblical worldview.”

Every adult has a worldview, and Barna’s past research shows that worldview is typically fully developed and operational before a person becomes a teenager. The AWVI 2022 is a national survey that looks specifically at the worldview of parents and pastors, two significant influences when it comes to spiritual development.

Here are a few of the specific findings from “The Worldview Dilemma of American Parents,” the first of several releases based upon AWVI 2022:

According to findings in the AWVI 2022, the parents of pre-teen children most likely to possess a biblical worldview include: those over 45 years old, political and theological conservatives, people from households making between $40,000 and $70,000, residents of southern and western states, adults who have not graduated from a college or university, those who attend a Christian church associated with Protestantism, and born-again Christians.

The full AWVI 2022 Release #01, “The Worldview Dilemma of American Parents,” is available on the CRC website.