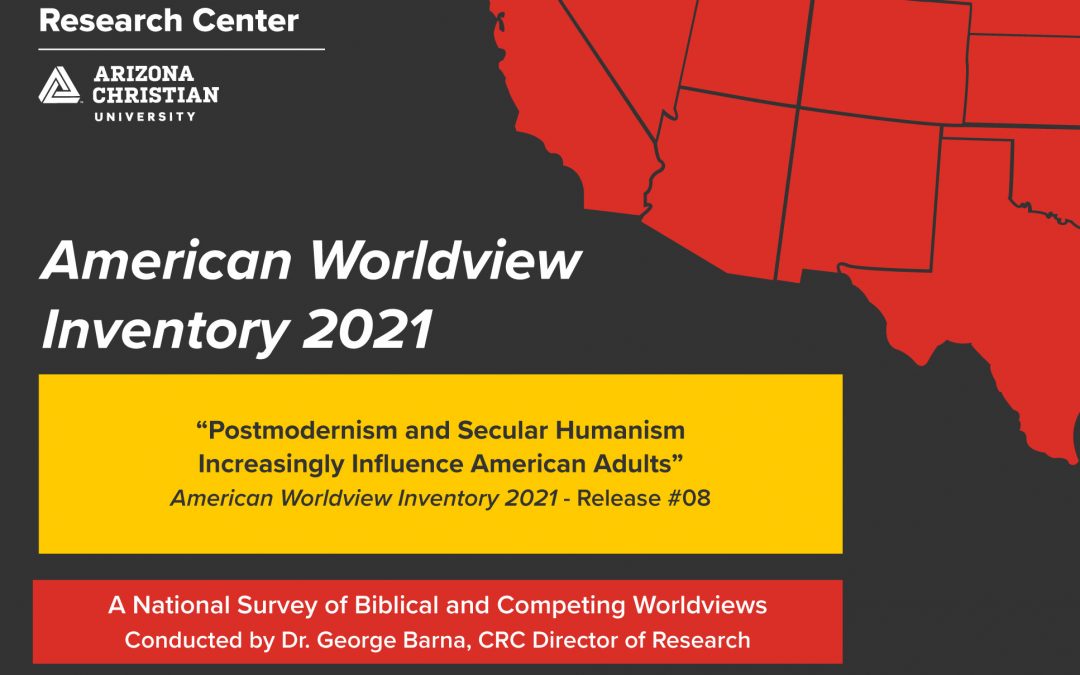 As Americans increasingly reject biblical thinking, they are replacing it with ideas from postmodernism and secular humanism, with one of every six adults regularly relying on those alternative worldviews in their everyday thinking and decision-making.

According to George Barna, Director of Research for the Cultural Research Center at Arizona Christian University, this ongoing shift in the cultural landscape is giving birth to an emerging, non-traditional moral order in America—one that is highly relativistic in nature and hostile to the role of God in ordering human life.

Unlike the biblical worldview, these two alternative worldviews reject the idea of absolute truth—and instead put human reason, science, and subjective morality at the center of our nation’s thinking and behavior.

ACU President Len Munsil said the findings point to the importance of intentionally developing and living according to the biblical worldview.

Munsil said, “This research underscores the fact that as a nation, we’re losing our foundations. We can see the results of this all around us—loss of moral truth, the devaluing of human life, erosion of liberties, and losing sight of the very beliefs and practices that lead to human flourishing.”

“We owe it to the next generation to winsomely share with them the truth of God and the Bible,” Munsil explained. “They are a generation searching for meaning and purpose—asking the big questions.”

The eighth and final report from the AWVI 2021, the first-ever national study of both biblical and competing worldviews among American adults, found that secular humanism and postmodernism are growing in influence in American culture—with 16% of U.S. adults relying on each of these two competing worldviews in their daily lives. Only Moralistic Therapeutic Deism and the biblical worldview hold more sway.

The research notes that most Americans do not know what worldviews they possess or draw from in their daily choices. In fact, the most common worldview among Americans is Syncretism, which isn’t a true worldview but rather a collection of disparate worldview elements blended into a customized philosophy of life.

All told, 88 percent of American adults hold to Syncretism, according to AWVI 2021 findings. In Syncretism, individuals pick and choose elements from various worldviews, creating a hodge-podge of beliefs that often conflict and contradict one another.

Barna, veteran researcher and author of the AWVI 2021, said these new findings should be a “wake-up call” for American Christians.

According to the latest AWVI 2021 report, only 2% of U.S. adults have adopted secular humanism and only 1% have embraced postmodernism as their dominant, driving worldview.

Still the findings show U.S. adults are weaving ideas from these alternative worldviews into their individual worldview. Some of the most common postmodern ideas that are widely accepted by U.S. adults include:

The study also found some of the most common secular humanist ideas that are widely accepted by U.S. adults include:

Unlike postmodernism and secular humanism, the biblical worldview holds that absolute moral truth exists, and that the Bible as authored by God contains indisputable truth principles in a form we can access and understand; it is relevant to our ability to discern the meaning of life and our role in the unfolding of God’s larger narrative for humanity.

The biblical worldview places great value on all human life, and views God as Sovereign and as the author of human life. It roots morality in God’s truth, rather than in human reason or science.

The new findings give insight into how American adults answer the big questions of life.

As Barna notes, “If you list the components of the alternative views, you wind up with a fascinating, even controversial, list of topics … including the origins of the universe, evolution, truth, moral behavior, life after death, the existence of God, role of history, definition of success, and more.”

“The burden [is] on our shoulders to explain why we believe the Bible is true and to be able to describe in the simplest terms what it teaches,” Barna explained.