CRC Report Finds Nearly 70% of Americans Claim to be ‘Christian,’ But What Does That Mean? 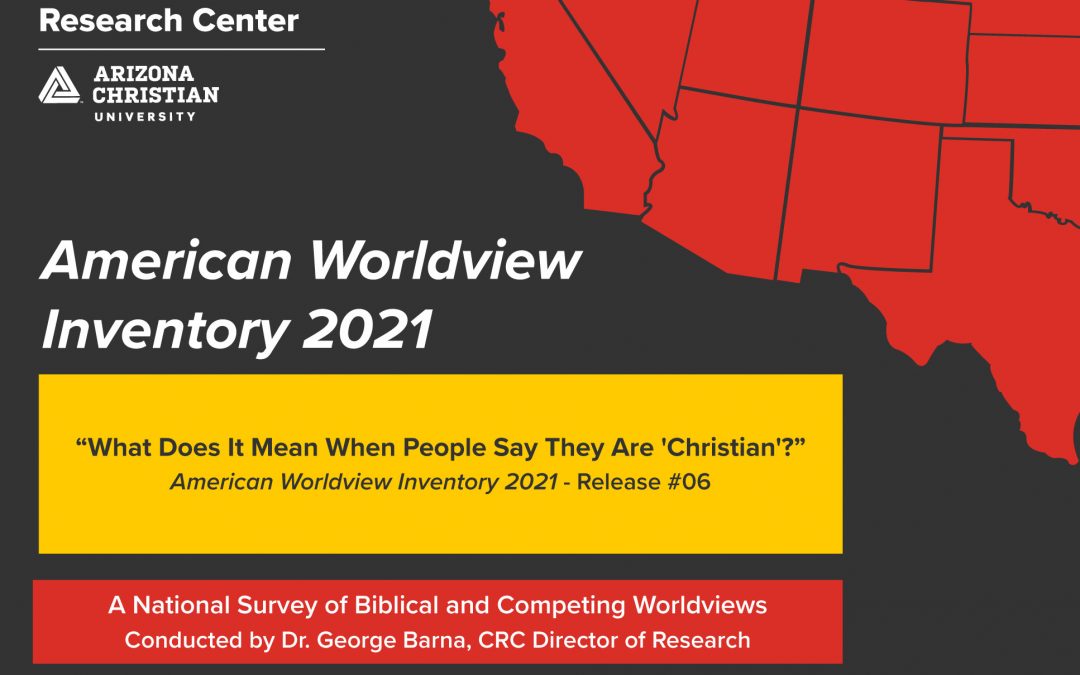 More than two-thirds of American adults adopt the label “Christian” to identify their faith, but this broad adoption of that label may reflect little deep spiritual commitment to foundational biblical teachings or understanding of what it means to be a Christ-follower.

In fact, a new study shows that the meaning of the term “Christian” is far from monolithic, with a number of diverse and often-conflicting views—and even many unbiblical perspectives—among those who embrace the label.

According to the latest report from the Cultural Research Center at Arizona Christian University, a full 69% of U.S. adults self-identify as Christian. Yet, a closer look at this large swath of the American population reveals their professed “Christian” faith is built on disturbingly shaky theological foundations.

For example, the study found that although self-identified Christians in the study embrace many basic tenets of the faith, at the same time they hold many views in conflict with traditional teachings—among these, believing people are basically good and rejecting the existence of objective truth rooted in Scripture. Many don’t even acknowledge Jesus Christ as savior among their theological beliefs.

They also look more to feelings, experiences, and family and friends than the Bible for moral guidance. A full 58% contend the Holy Spirit is not a real, living being and 57% embrace the concept of Karma And only 9% of this large population of self-identified Christians actually possess a biblical worldview, according to new research from George Barna, CRC Director of Research.

As Barna explained, “’Christian’ has become somewhat of a generic term rather than a name that reflects a deep commitment to passionately pursuing and being like Jesus Christ.”

The CRC research also shows that these differences in biblical beliefs often lead to widely divergent views on questions of morality and politics among American Christians, including views on marriage, abortion, and sex before marriage. It also creates an increasingly distorted cultural perception of the beliefs and behaviors of Christians, especially when it comes to understanding political polling and voting, according to Barna.

Unsurprisingly, when it comes to these key social, moral, and political issues, Integrated Disciples—those with a biblical worldview—tend to be more conservative than other self-identified Christians.

As ACU President Len Munsil noted, “This groundbreaking research from the Cultural Research Center once again demonstrates how important it is for our University to strategically train the next generation in biblical worldview.”

Munsil explained, “The foundations of the Christian faith need to be built solidly within each of our students. Our goal is to graduate Integrated Disciples, students who deeply understand and apply biblical principles in all areas of their lives.”

But Munsil also pointed to both the need and opportunity to expand biblical discipleship within American churches and beyond. “Fragments of biblical truth are still embraced by the overwhelming majority of American adults, which means that each of the estimated 176 million self-identified Christians has a starting point of belief that can be built upon and refined into a mature, consistent biblical worldview.”

The latest report from CRC’s American Worldview Inventory 2021 examines different groups of people labeled as Christian and compares the spiritual leanings of each group. The segments explored include those who call themselves Christian; self-identified born-again Christians; self-described evangelical Christians; people whose theological beliefs establish them as born-again Christians; and people who possess a biblical worldview (referred to as Integrated Disciples).

The study found a dramatic range in the number of people who might be described as “Christian,” depending on how it’s defined. For example, the most inclusive definition is self-identification: people who simply say they are Christian (69%). At the opposite end of the continuum are those who contend they are Christian by virtue of possessing a biblical worldview (just 9%). The other three groups examined in the study— self-identified born-again Christians, self-described evangelical Christians, and theologically-born again Christians—comprised anywhere from 28% to 35% of U.S. adults as “Christian.”

Depending on the definition, the total number of American Christians ranges from a high of an estimated 176 million self-professed Christians to a low of about 15 million adults who have a biblical worldview. Of course, ultimately, only God knows the heart of each individuals as to who has genuinely put their trust in Jesus Christ.

Barna explained that the broader self-conception of the Christian faith adopted by almost 70% of American adults tends to dilute and distort the cultural understanding of what constitutes Christianity.

This is especially true in the area of politics and voting behavior of Christians. He pointed out that many polling organizations shortcut the spiritual classification process by simply asking people if they embrace a particular religious label, including self-identification as a Christian.

“The survey results clearly demonstrate how careful you have to be when interpreting data associated with a particular segment of people who are labeled as Christians,” Barna cautioned. “Political polling, in particular, may mislead people regarding the views and preferences of genuine Christ-followers simply based on how those surveys measure the Christian population.”

Further data and insights into the differences in the beliefs and behavioral profiles of these groups are presented in detail in the latest report from the American Worldview Inventory 2021, “Release #6: “What Does It Mean When People Say They Are ‘Christian’?” available here.