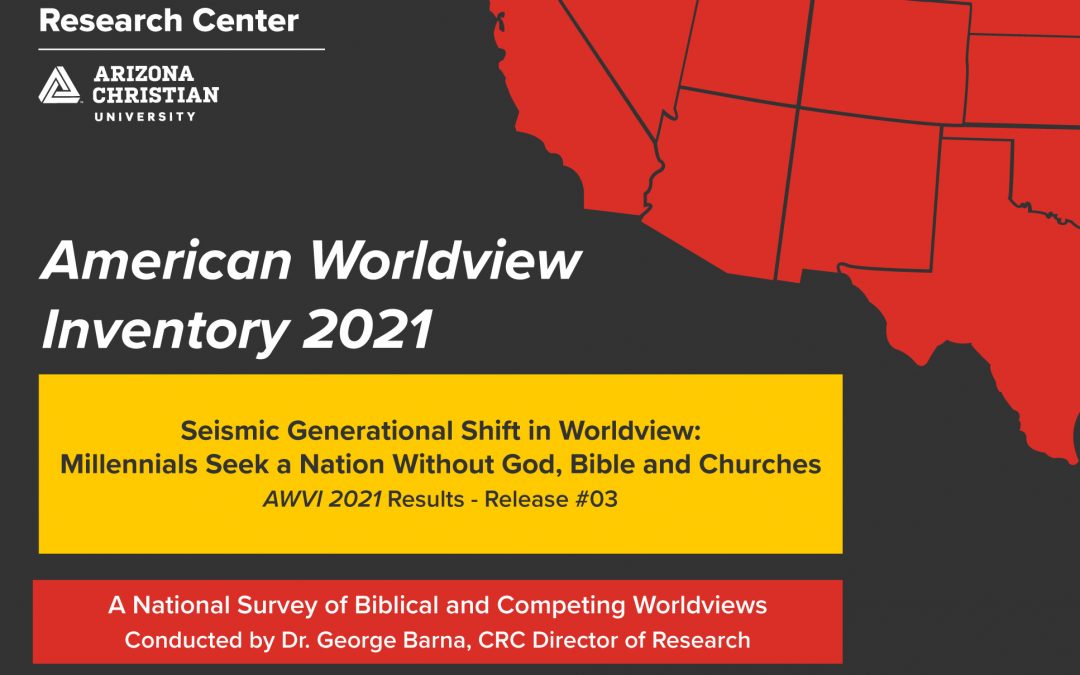 Our nation is undergoing a seismic worldview shift driven by younger Americans, especially Millennials, who are far more likely to be among the “Don’ts”—they don’t know, believe, or care whether God exists.

This reflects a fundamental break with older Americans, a majority of whom view God as all-knowing, all-powerful, and just, and as the designer, creator, and sustainer of the Universe, according to a new report from the American Worldview Inventory 2021.

The latest AWVI 2021 identifies stark generational differences that threaten to reshape the nation’s religious parameters beyond recognition. According to George Barna, Director of Research for the Cultural Research Center, this radical spiritual revolution has created a generation seeking a reimagined world without God, the Bible, or churches.

“Gen X and the Millennials have solidified dramatic changes in the nation’s central beliefs and lifestyles,” explained Barna. “The result is a culture in which core institutions, including churches, are continually being radically redefined.”

The latest AWVI 2021 report revealed more than two dozen examples of Millennials (ages 18 to 36) being substantially more likely than any other generation to reject biblical principles in favor of more worldly spiritual perspectives and practices:

Strikingly, while four out of 10 people 55 or older (40%) can be classified as born-again Christians based on their beliefs about personal salvation, just one out of every six Millennials (16%) meets the criterion. Instead, the research shows younger Americans are far more likely to embrace a counterfeit version of Christianity known as Moralistic Therapeutic Deism for worldview guidance.

According to ACU President Len Munsil, “As a Christian university president for the past decade and veteran of cultural battles for more than 35 years, I’ve seen dramatic evidence of this shift.”

“I believe now more than ever that we’re in desperate need of an awakening—and a biblical worldview revolution,” said Munsil.

Despite these generational differences, the biblical worldview is declining among all generations. An earlier report from AWVI 2021 identified the dominant worldview among all four generations—Millennials, Gen-Xers (37 to 54), Baby Boomers (55 to 74), and Builders (75 and older)—to be Syncretism, a patchwork of conflicting, often irreconcilable beliefs and values.

The American Worldview Inventory 2021 is the first-ever national survey of biblical and competing worldviews. The latest report, “AWVI 2021 Results – Release #03: The Seismic Generational Shift in Worldview: Millennials Seek a Nation Without God, Bible and Churches,” is available here.