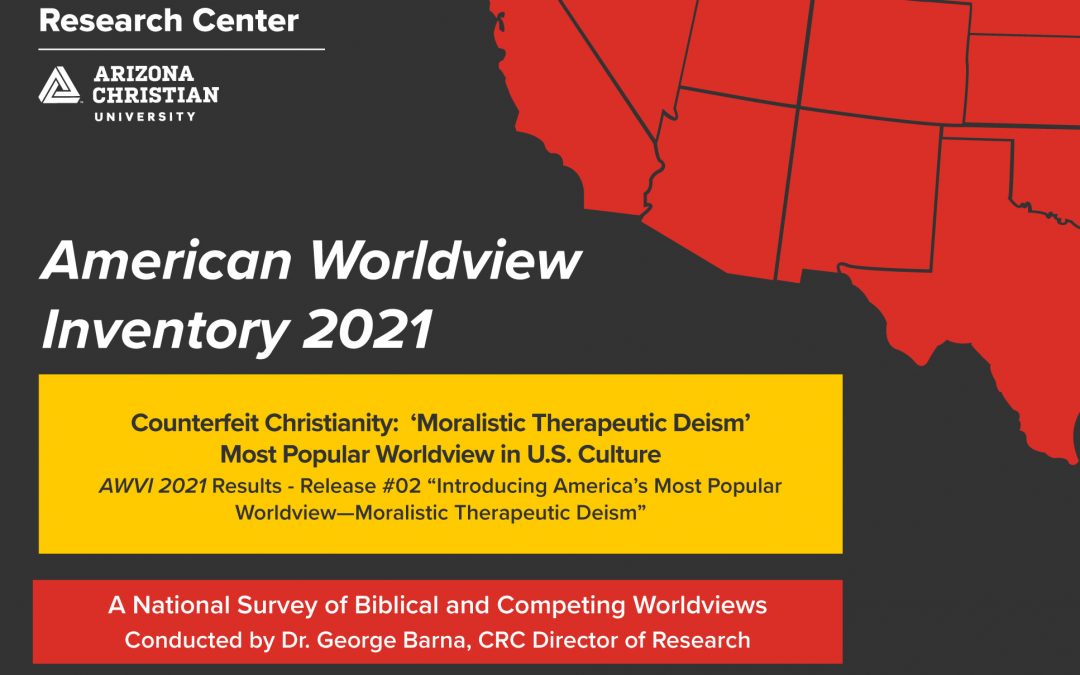 A popular “fake” form of Christianity—Moralistic Therapeutic Deism—was discovered to be profoundly influencing Christian teenagers in the early 2000s.

Now a groundbreaking new study from the Cultural Research Center at Arizona Christian University shows that as adults, the under-50 generation still embraces the Moralistic Therapeutic Deism of their formative years.

But what was once a rogue belief system that characterized Christian teen culture now permeates both American culture and the Christian church, making Moralistic Therapeutic Deism the most popular worldview in the United States today.

And that’s not good news for America.

As Arizona Christian University President Len Munsil noted, “As a nation, the biblical worldview is running on fumes.”

Munsil explained, “People see themselves as Christians, but these findings show they are actually living out a watered-down, counterfeit worldview that looks more like the culture around them than the biblical Christianity they profess.”

According to Munsil, “This report is another powerful reminder of the importance of biblical worldview training—at every stage of life. Wrong views about what it means to be a Christian learned in the teen years can still define worldview for adults.”

New findings from the American Worldview Inventory 2021 show that nearly four of 10 adults (38%) are more likely to embrace elements of Moralistic Therapeutic Deism than other popular worldviews, including Biblical Theism (or the biblical worldview), Secular Humanism, Postmodernism, Nihilism, Marxism (along with its offshoot, Critical Theory) and Eastern Mysticism (or “New Age”).

According to Dr. George Barna, CRC Director of Research and author of the AWVI 2021, Moralistic Therapeutic Deism—which he describes as “fake Christianity”—is a worldview that is defined and driven by current culture more than by historic religious truths or a comprehensive and coherent doctrine.

As Barna explained, “Consequently, this approach to spirituality asks little of its followers while providing the comfort, convenience, and community they long for.”

Moralistic Therapeutic Deism (or MTD) was initially identified and named by sociologists Christian Smith and Melinda Lundquist Denton in their book, Soul Searching, published in 2005. It was based on national research among the teenagers of the turn of the millennium. At that time Smith and Denton identified several core beliefs that characterized the thinking and behavior of the group. Those components included:

According to the veteran researcher Barna, “Practitioners of Moralistic Therapeutic Deism are not anti-religion or anti-Christianity. They just are not willing to surrender themselves to authentic Christianity’s demands—or to believe that a real faith would even make such demands of them.”

AWVI 2021, the first-ever national study of biblical and competing worldviews, found that although three out of four people (74%) who embrace MTD consider themselves to be Christians, only one-sixth (16%) qualify as born-again based on their theology. The study also found that the beliefs of the vast majority of this group conflict with basic biblical teaching. For example, they:

The study also found that people under age 50 were more than twice as likely as the 50-plus group to find MTD appealing. This finding is expected given the genesis of the worldview itself: research among teenagers at the start of the new millennium.

In addition, people drawn to MTD are more likely to engage in biblical faith practices than they are to hold biblical beliefs. Of those, 13% engaged in a series of faith practices that are robustly biblical (Bible reading, praying to and worshiping God, confessing personal sins, and pursuing God’s will for their life), but less than 1% typically endorse biblical teaching and follow through on those matters.

According to Barna, “The fact that a greater percentage of people who call themselves Christian draw from Moralistic Therapeutic Deism than draw from the Bible says a lot about the state of the Christian Church in America, in all of its manifestations.” As he noted, “Simply and objectively stated, Christianity in this nation is rotting from the inside out.”

The AWVI 2021 findings also point to opportunities for additional worldview training to correct errant views, including specific areas of belief where those under the sway of Moralistic Therapeutic Deism might be turned back to a biblical worldview.

As Barna noted, “It seems that most of these folks want to do the right thing; they simply have been led down the wrong paths toward achieving that end.”

Click here for a full report of the results.