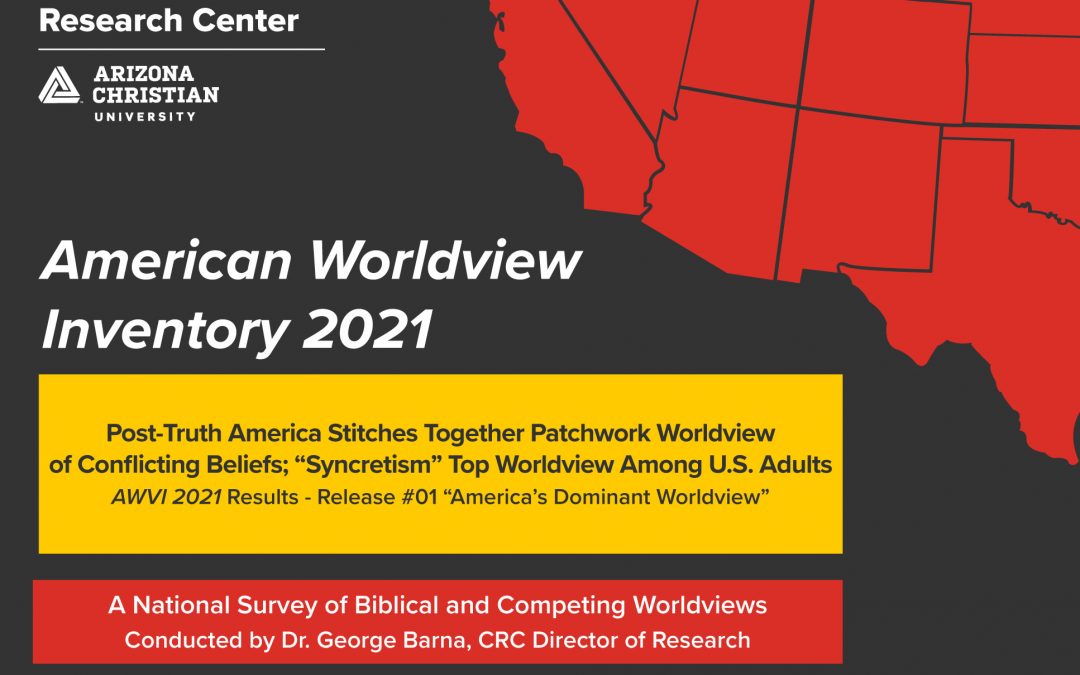 Research conducted by the Cultural Research Center in 2020 established that only 6% of American adults possess a biblical worldview. But until now the question remained “what have the others put in its place?”

According to the groundbreaking American Worldview Inventory 2021—the first survey of its kind to measure not only biblical worldview, but six prominent competing worldviews—the overwhelming majority of American adults lack a cohesive, coherent worldview, and instead substitute a patchwork of conflicting, often irreconcilable beliefs and values as they navigate life.

Specifically, there was no predominant worldview embraced by American adults from among the seven worldviews measured—Biblical Theism (a biblical worldview), Secular Humanism, Postmodernism, Moralistic Therapeutic Deism, Nihilism, Marxism (along with its offshoot, Critical Theory) and Eastern Mysticism (also known as “New Age”), according to new research from Dr. George Barna and the Cultural Research Center at Arizona Christian University.

According to Barna, the big winner from among the worldviews measured was “none of the above.” Instead, the new study found that nearly nine out of 10 American adults (88%) embrace an impure, unrecognizable worldview that blends ideas from these multiple perspectives—a worldview that Barna calls “syncretism.”

“Syncretism is a cut-and-paste approach to making sense of life,” explained Barna, CRC Director of Research and author of AWVI 2021. “Rather than developing an internally consistent and philosophically coherent perspective, Americans embrace points of view or actions that feel comfortable or most convenient. Those beliefs and behaviors are often inconsistent, or even contradictory, but few Americans seemed troubled by that.”

ACU President Len Munsil sees the latest CRC research as both a warning and a challenge.

“Our culture’s lack of a coherent worldview—of any kind—is stunning. We no longer think deeply about what defines our lives or who we are as a culture, and many Americans hold beliefs that violate basic rules of logic by contradicting each other,” Munsil said. “This is a wake-up call—and tremendous opportunity—for those who care about promoting biblical values in American culture.”

“Even if only 6% remain, the biblical worldview is still the most dominant worldview in American culture,” Munsil said. “This is a great foundation to build on. Strategic biblical worldview training has the potential to make serious inroads into our culture—if we take a long view and begin training young people – especially those who claim to be followers of Jesus – to think well and deeply and to conform their thinking to align with the truths of Scripture.

Munsil noted, “This is one of our key distinctives at Arizona Christian University.”

According to Barna, “In American culture today, worldview is caught more than it is taught in the United States. A school like Arizona Christian University, where every class is intentionally and strategically taught through a biblical worldview lens, is a real aberration.”

The incidence of the other worldviews ranged from 2% of the public embracing Secular Humanism to 1% of adults embodying each of Postmodernism, Moralistic Therapeutic Deism and Nihilism. While both Marxism and Eastern Mysticism (also known as “New Age”) receive a lot of media coverage, less than one-half of one percent subscribe to either worldview.

How has this happened?

“Unfortunately, worldview in America develops by default,” Barna explained. “Very few schools’ curriculum focus directly on a person’s worldview. Most adults don’t even know what a worldview is, much less what the worldview alternatives are, how they differ, and which one they possess. We’ve been shocked at how few Christian schools, as well as religious congregations, directly address worldview issues.”

Barna noted that in his more than 25 years of studying worldview in America, he has discovered that people generally adopt worldview beliefs and behaviors that they encounter from arts and entertainment, news reports, political statements made by public leaders, and through conversations and experiences with people they trust.

“It takes years of holistic teaching, integration of thought and behavior, and reinforcement of appropriate choices before someone is likely to develop a biblical worldview,” Barna said.

Barna suggested that the recent concern within educational and pastoral communities about worldview as the foundation of people’s decision-making process, driven by the heightened ideological battles dividing the nation, is a hopeful sign that Americans (and especially conservative Christians) may be waking up to the importance of worldview development, especially among young people. He cautioned, however, that it will be an uphill battle.

“Our studies show that Americans are largely neither deep nor sophisticated thinkers,” the veteran researcher noted. “We’ve become selfish and emotion-driven, leaving logic behind. To promote a way of life that pushes us to think more clearly, consistently, and purposefully will take time and considerable effort, and will be uncomfortable. Most people seem more interested in living a life of comfort and convenience. The progress will be slow, but people who are willing to fight for a more reasonable way of thinking and acting can make a difference.”

Click here for a full report of the results.