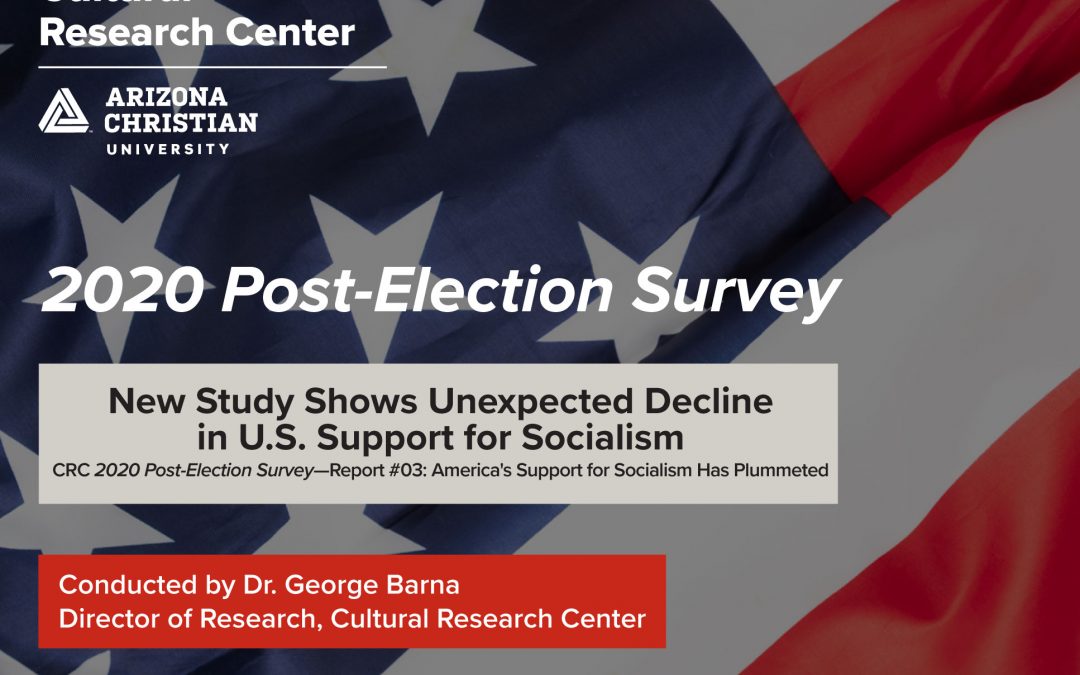 Support for socialism in the United States is at its lowest level in years—with less than a third of all American adults (32%) preferring socialism to capitalism in the wake of the 2020 election—after reaching a peak of 41% of U.S. adults only two years earlier.

The latest findings from the 2020 Post-Election Survey from the Cultural Research Center at Arizona Christian University show a sharp and relatively rapid decline in popular support for socialism.

According to the survey conducted by CRC Director of Research Dr. George Barna, the 9 percentage-point decline among U.S. adults since 2018 represents more than 20 million fewer individuals preferring socialism over capitalism. A two-thirds majority (68%) said they prefer capitalism to socialism (more than 170 million adults). Still, the fact that one-third—about 80 million Americans—prefer socialism is significant, despite the overall decline in support for socialism nationwide.

According to the survey, those with a biblical worldview, specifically “integrated disciples” and  SAGE Cons (i.e., Spiritually Active Governance Engaged Conservative Christians), expressed the least support for socialism—only 12%.

According to the findings, younger Americans (under 30) continued to show the highest support for socialism of any age group, yet even their support dipped slightly from 48% to 43%.

ACU President Len Munsil said he found many of the survey results encouraging, especially considering the University’s emphasis on strategic biblical worldview training and that support for the free market is among the University’s CORE Commitments.

“The survey shows that having a biblical worldview is the best defense against embracing socialism,” he explained. “At ACU, we train students to apply the biblical worldview to every area of life, including how they think about economics and the opportunities economic freedom provide for human flourishing”

Munsil continued, “The findings also show support for socialism among younger Americans is declining—which means minds can be changed in the cultural debate of socialism versus capitalism. Our students are challenged to engage seriously with the moral and Scriptural arguments for the free market, and to look critically at the ideas and consequences of socialism.”

Having tracked public opinion on this matter for nearly a decade, Barna said the most recent findings demonstrate our nation’s ongoing ambivalence over socialism. “These significant swings in support over such a short time period reflect an underlying absence of deep understanding of how our nation’s economic system and institutions operate,” he said.

Barna stressed the importance of educating Americans about socialism. “It is in the best interests of the nation and its future to help people of all ages better understand the meaning and long-term implications of socialism before substantial systemic changes are made.”

“Transitioning from capitalism to socialism would be a major, life-changing choice that would have dramatic consequences and far-reaching impacts on the health and well-being of our country and its people,” Barna continued. “Yet, because they are inadequately educated on these matters, many people are easily swayed by superficial, tangential, or emotional arguments.”

According to the survey, those least likely to support socialism over capitalism include political conservatives (21%), those 50-years-old or over (23%), and those with a biblical worldview (12%).

Americans who do not possess a biblical worldview are far more likely to embrace socialism. According to the survey, those of non-Christian faith saw the greatest increase in support for socialism, from 38% to 44%. Interestingly, spiritual skeptics demonstrate the most volatility when it comes to socialism. More than half (51%) of spiritual skeptics embraced socialism over capitalism in early 2018, but that number dropped by 16 percentage points to 35%, in the wake of the 2020 election. Spiritual skeptics are those who say they do not know, do not believe, or don’t care if God exists.

The nationwide 2020 Post-Election Survey was conducted November 4 through 16, 2020. The third release of findings, “America’s Thirst for Socialism Has Plummeted,” from that survey is available here.