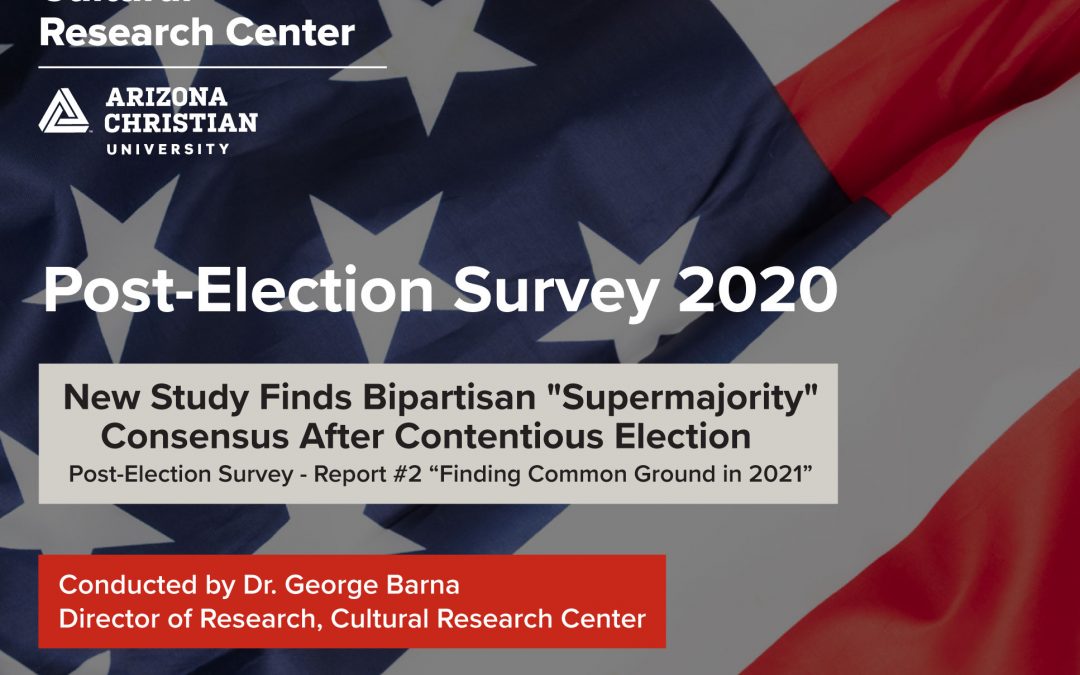 Although 2020 may be remembered as one of the most contentious presidential elections in American history, a new post-election survey shows strong bipartisan support—representing a “supermajority” of more than two-thirds of Republican voters and two-thirds of Democratic voters—for a number of seeming “win-win” policy issues in the new year.

According to a new survey by Dr. George Barna of the Cultural Research Center at Arizona Christian , despite the ongoing media narrative of an irredeemably divided America, the political “wish list” of Americans of both parties after the election includes a number of broadly popular policies:

Incredibly, all of the above policies receive at least two-thirds support from voters for each presidential candidate, and many have the support of up to 83 percent of American voters, according to the CRC Post-Election Survey. These findings provide hope that in the wake of the 2020 election, national unity and post-election healing are possible, especially if the incoming president and other elected officials focus on these consensus issues in 2021.

According to Barna, common ground may be lost if the incoming administration of President-Elect Biden and other Democratic leaders insist on pursuing a governing “mandate” and instead implement a progressive agenda with policies that lack similar bipartisan support.

“Certain elements of the ‘Biden Agenda’ would most likely raise tensions in the nation rather than advance peace and progress,” Barna said.

Specifically, the survey found a clear lack of bipartisan support for a number of key issues in the Biden agenda, including: Universal healthcare provided by the U.S. government; redistributing wealth to reduce income inequalities; more restrictive laws regarding private gun ownership; eliminating the use of fossil fuels as part of the “Green New Deal”; and increasing the number of U.S. Supreme Court justices from nine to 13. These issues were listed as the first or second priority among Biden voters, but most garnered well under 50% support from Trump voters.

According to Barna, pursuing these progressive policies is more likely to increase political polarization and conflict. “Our research found a number of key areas of common ground among all voters, whether they supported Donald Trump or Joe Biden,” Barna explained.

“The research clearly shows that these are the policies that an overwhelming number of Americans, regardless of political party, want.” Barna said, “There is a clearer path to unity and healing in these common-ground issues.”

“Pursuing these six outcomes could begin the process of rallying Americans around the things on which they agree, rather than further dividing the nation on the basis of divergent and ideologically irreconcilable points of view,” Barna said.

Specifically, the survey identified “supermajority” bipartisan support for a number of key issues:

Conversely, the survey found that the most divisive issues of the progressive agenda included:

Despite common ground on many issues, abortion remains a lightning rod issue, with half of Trump voters (50%) in favor of repealing the U.S. Supreme Court’s 1973 Roe v. Wade decision, a policy favored by only 38% of Biden supporters.

“Democrats who now control the presidency and Congress have said they want to unite the nation – ‘America United’ is the theme of the Biden Inauguration,” said ACU President Len Munsil. “We will soon know whether they were being truthful. This research shows there is a clear path toward national unity. Based on which issues they prioritize in 2021, we will see whether Democrats were serious, or were simply using a unity theme as empty rhetoric while pursuing an agenda that creates further division, partisanship and polarization.”

The full report from the CRC Post-Election Survey can be found here.