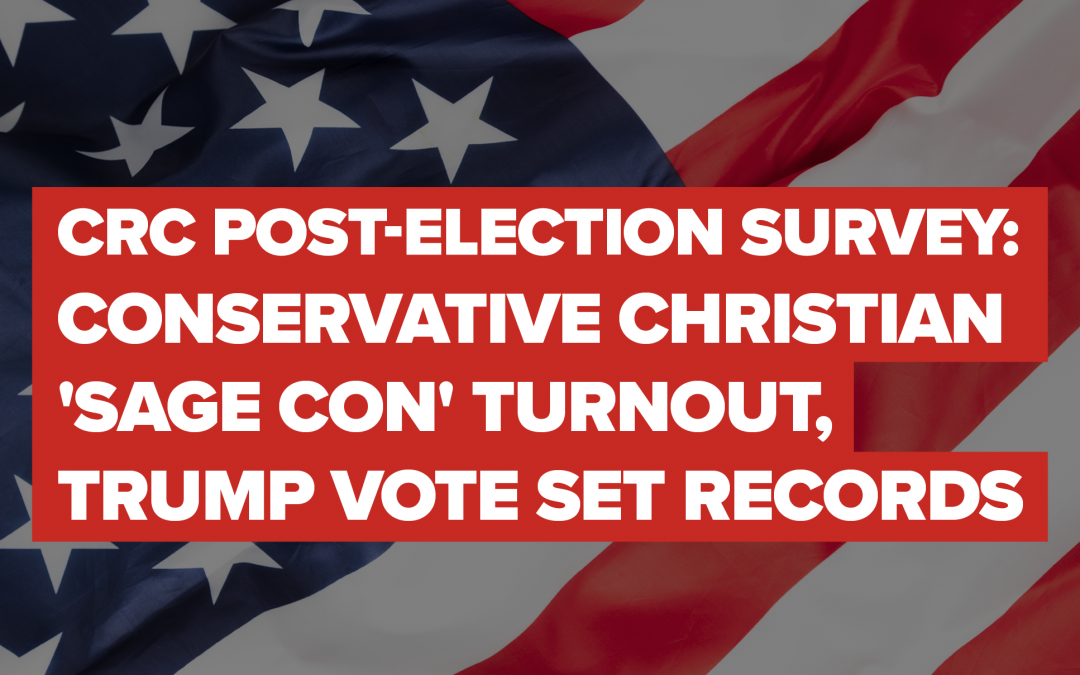 A new post-election survey shows Donald Trump would have lost by a landslide had a significant slice of the voting populace—conservative Christians who are active both spiritually and politically—not turned out and voted for him in overwhelming numbers.

The survey from the Cultural Research Center at Arizona Christian University also found that this key group of voters distrusts the election results amid allegations of election fraud and voting irregularities, with a large majority (79%) believing there were “numerous instances of abuse” in the election and a mere 1% believing the voting process was legally carried out and votes were accurately counted.

The 2020 Post-Election Survey was conducted by CRC Director of Research George Barna during the week following the election, and found that 99 percent of SAGE Cons—an acronym for Spiritually Active Governance Engaged Conservative Christians—turned out to vote. That nearly universal turnout dwarfed the estimated national turnout level of 66%, which itself was above average. SAGE Cons represent just 9% of the adult population, but their extreme level of turnout enabled them to constitute slightly more than 14% of the voting population, equaling 23 million votes. Trump garnering 97% of these, or a net 21 million votes.

SAGE Cons, whose political choices are driven by their biblical perspectives and personal commitment to Jesus Christ, have been a target of criticism during the past four years. Critics argue that President Trump lacks the moral character that a public official or candidate should possess in order to receive the support of Christians, according to Barna.

The CRC survey found that SAGE Con support for Trump was based on policy not personality.

As Barna noted, “Nobody is going to confuse Donald Trump with Jesus Christ, but SAGE Cons believe that the Trump portfolio of policy positions much better reflects the biblical worldview that SAGE Cons seek to implement in all walks of life than do those of Mr. Biden.”

“It is clear from this research that voters with a biblical worldview arrived at the point of supporting Donald Trump in spite of questions and concerns about his character,” said ACU President Len Munsil. “They almost universally saw that his administration’s policies and personnel aligned much more closely with biblical principles than Mr. Biden’s. The myth that large numbers of conservative Christians would not turn out to prevent a candidate who supports abortion on demand and other radical policies from gaining power is disproved by these results.”

The CRC survey results reflect what this biblical worldview analysis means for this group of voters. Respondents identified the issue positions that mean the most to them. Far and away the most significant of those has been Trump’s anti-abortion stance (identified by 60% of SAGE Cons as one of the two issues that most influenced their vote). Other positions of significance were his federal court nominations and appointments (23%); support for religious freedom (17%); and positions regarding law and order, rule of law, and obeying the U.S. Constitution (12%). An additional three out of ten SAGE Cons (28%) identified the economy as a top issue of influence.

Barna explained, “With the American population moving away from the Bible as a source of truth and moral guidance, SAGE Cons have been pleasantly surprised at how the Trump agenda has coincided with many biblical principles on social and economic matters.”

“CRC’s research before and after the election showed that this was essentially a competition of opposing worldviews,” the veteran researcher noted.