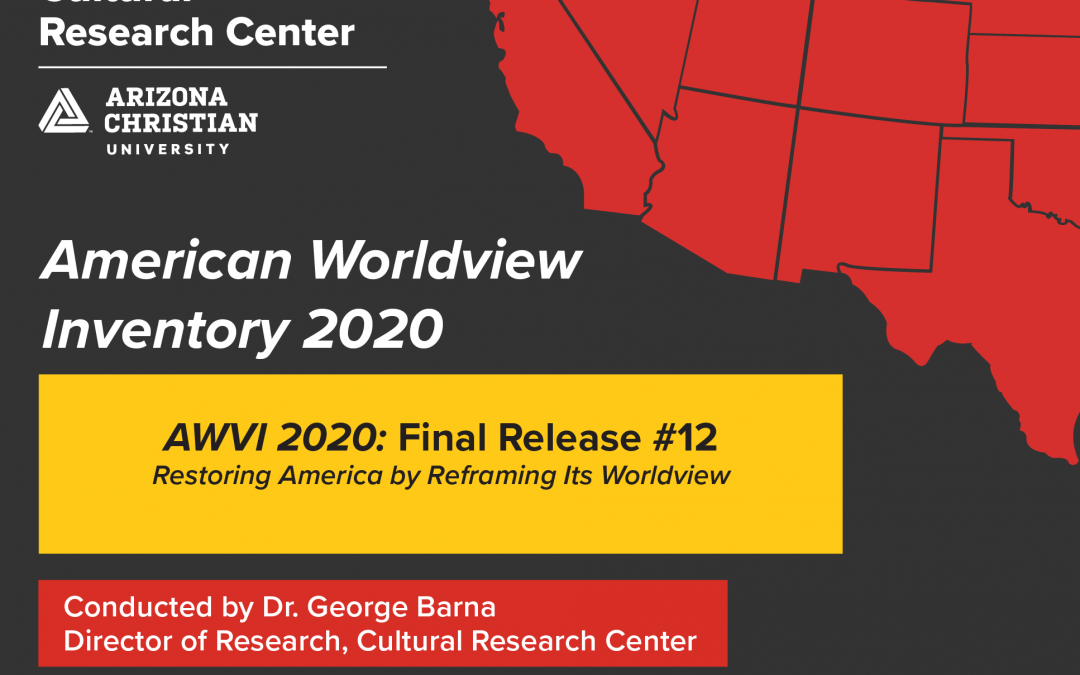 The fierce conflict surrounding the 2020 election is less about politics than it is about the ongoing battle for worldview supremacy in America. And this recent intensification around presidential politics points to our nation’s desperate need to rehabilitate and rebuild the biblical worldview.

According to Dr. George Barna, Director of Research at the Cultural Research Center at Arizona Christian University, what we are witnessing as a nation is the latest example of the worldview war that is ripping America apart.

“Most Americans are oblivious to this, the real civil war ravaging America,” Dr. Barna explained in the final release from CRC’s American Worldview Inventory 2020. “Our nation is steadily moving toward the elimination of the biblical worldview as the cornerstone of our society.”

ACU President Len Munsil noted that this nationwide deterioration of biblical worldview is what makes ACU’s commitment to infusing biblical worldview training into every aspect of its educational programs so important. “We want our students to not only think like Jesus, but as much as humanly possible we want them to live like Jesus,” Munsil said. “As they commit to biblical truth in the way they live their own lives, they will flourish, gain influence and draw others to the truth of the gospel.”

Dr. Barna said the erosion of our nation’s moral foundation can still be reversed with a clear strategy to rehabilitate the biblical worldview in America. Using research findings from his groundbreaking American Worldview Inventory 2020, Dr. Barna identified three key segments of the American population that might lead the way to restoring the biblical worldview foundation of our nation: children, college students and “Emergent Followers”—the 19 percent of Americans who possess a number of important biblical beliefs but not a fully developed biblical worldview.

As Dr. Barna explained, “Since only 2 percent of Millennials have a biblical worldview, time is of the essence. A quarter of a millennium ago, America’s families and churches worked together to build a great country. The cultural conditions are radically different now, but that same coalition can get the nation back on track.” He said the first step is to engage the 6 percent of American adults who possess a biblical worldview as a model for others. From there, strategic worldview training, led by committed and engaged churches and Christian educational institutions, should focus on the other three groups.

Dr. Barna points to the need to build biblical worldview during childhood, as his decades of worldview research show that building worldview typically happens between ages 15 months and 13 years old. He also notes that it is important to focus on biblical worldview growth and refinement among Christian college students, which is a key distinctive of the educational experience at Arizona Christian University.

Another promising group for biblical worldview improvement is among “Emergent Followers.” Although their worldview reflects an unhealthy blend of the biblical and the secular, Emergent Followers do subscribe to a number of basic biblical values. They are more likely than most other adults to embrace biblical views when it comes to faith practices, lifestyle and behavior, and sin, salvation and their relationship with God. This foundation of biblical understanding among Emergent Followers may provide an opportunity for building and refining a biblical worldview among a large segment of American adults, Barna said.

The previous 11 installments of the AWVI 2020 provided data-driven evidence of the decline of the biblical worldview in America. According to Barna, what Americans may not realize is that, if left to continue unabated, this loss of biblical values “will radically transform every aspect of American life—from family experiences and religious activity to business operations, classroom content, and the legal code.”

“Worldview turnaround may be possible, but it won’t be quick,” Dr. Barna said.