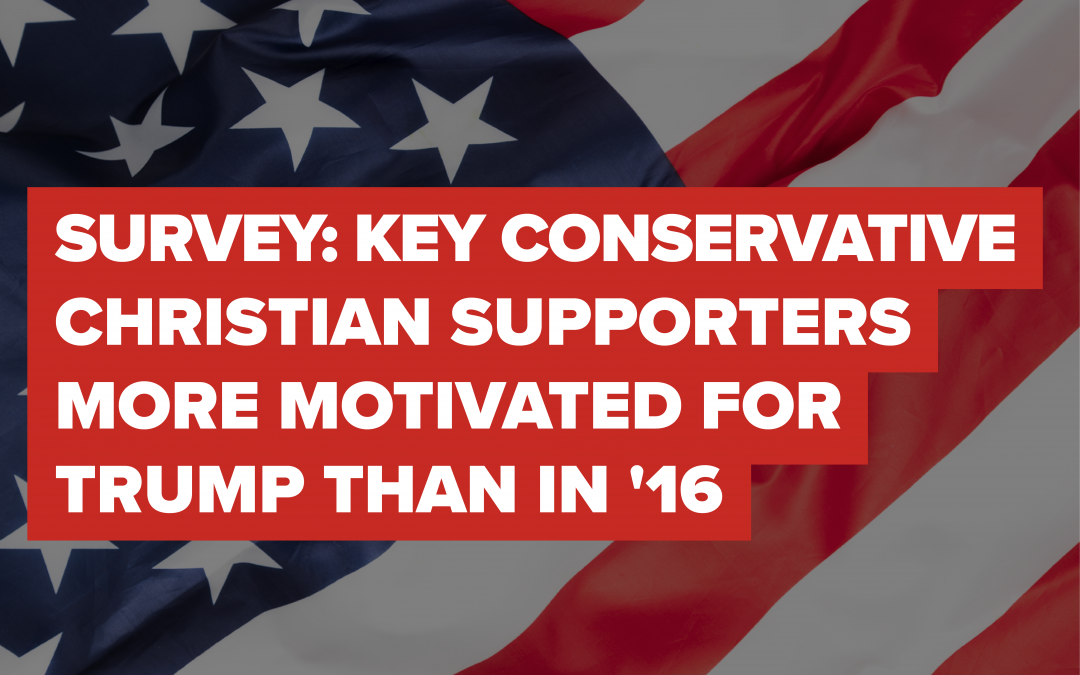 A key group of conservative Christian voters who helped secure Donald Trump’s 2016 presidential victory is expected to support him in even higher, nearly unanimous numbers on November 3, according to a new election survey commissioned by the Family Research Council and directed by Dr. George Barna, Director of Research for the Cultural Research Center at Arizona Christian University.

According to the survey, it is likely that 96% of SAGE Cons (Spiritually Active Governance Engaged Conservative Christians) will vote for Trump. Less than one-half of one percent of the group are expected to vote for Joe Biden.

Although SAGE Cons represent only about 9% of the population, they are expected to have an outsized influence on the outcome of the election.

According to Barna, “SAGE Cons are an important barometer of how the conservative Christian population will behave in the election.”

He explained, “SAGE Cons are a unique portion of the larger population. They’re more spiritually active and driven, more politically informed and active, much more likely to possess a biblical worldview that informs their thinking and choices, and they reflect an extremely high degree of consensus on a broad range of issues and beliefs.”

A separate survey earlier this year, the American Worldview Inventory 2020, conducted by Barna and the Cultural Research Center, found that nearly half of SAGE Cons possess a biblical worldview, making them more than seven times more likely than other adults to do so.

Barna, a veteran researcher and author of both surveys, said recently that the outcome of the 2020 election will likely be determined by worldview. “The 2020 election is not about personalities, parties, or even politics. It is an election to determine the dominant worldview in America,” he said.

SAGE Cons strongly hold to traditional biblical teachings, tend to be more politically conservative, and are highly likely to put their worldview into action when they vote.

The survey found that while the key issues for SAGE Cons are similar to those that influenced them in 2016, they are substantially different from the issues influencing other adults. They identified issues of life, religious freedom, and the importance of federal court appointments among the issues that most influenced their vote. They also rated America’s morals and values as the sixth most significant issue this election.

Engaged in political polling since 1976, Barna also commented on the controversy regarding whether the polls can be trusted in 2020 and how to square the SAGE Con statistics with the blizzard of national surveys showing Joe Biden with a double-digit lead over Donald Trump.

“There does appear to be a ‘hidden’ Trump vote, probably in the range of four to eight percentage points,” Barna explained, noting that several surveys he had conducted indicated such an undercount for the incumbent.

“Once Trump supporters were alerted to such a ‘hidden’ base of support, that awareness seems to have generated momentum among other Trump supporters to either refuse to answer surveys, thus skewing survey samples, or to provide misleading answers to the candidate preference question, thereby skewing the measured response,” Barna said.

“Some conservative voters have even described how unsafe they felt when asked to divulge their candidate preference to a researcher they did not know and had no reason to trust regarding confidentiality and security,” he said.

Another often overlooked issue, Barna claims, is the representative nature of survey samples.

“One of the foundations of a random or representative sample is that you generate a high enough response rate from the population being researched to have a reliable reflection of the whole,” Barna explained. “These days, both telephone surveys and online surveys receive shockingly little cooperation from the public. Although that fact is rarely mentioned, low response rates significantly reduce the reliability of the results.”

The full report, “President Trump Will Get Overwhelming Support from Conservative Christians in 2020 – But for Different Reasons than in 2016,” is available here.