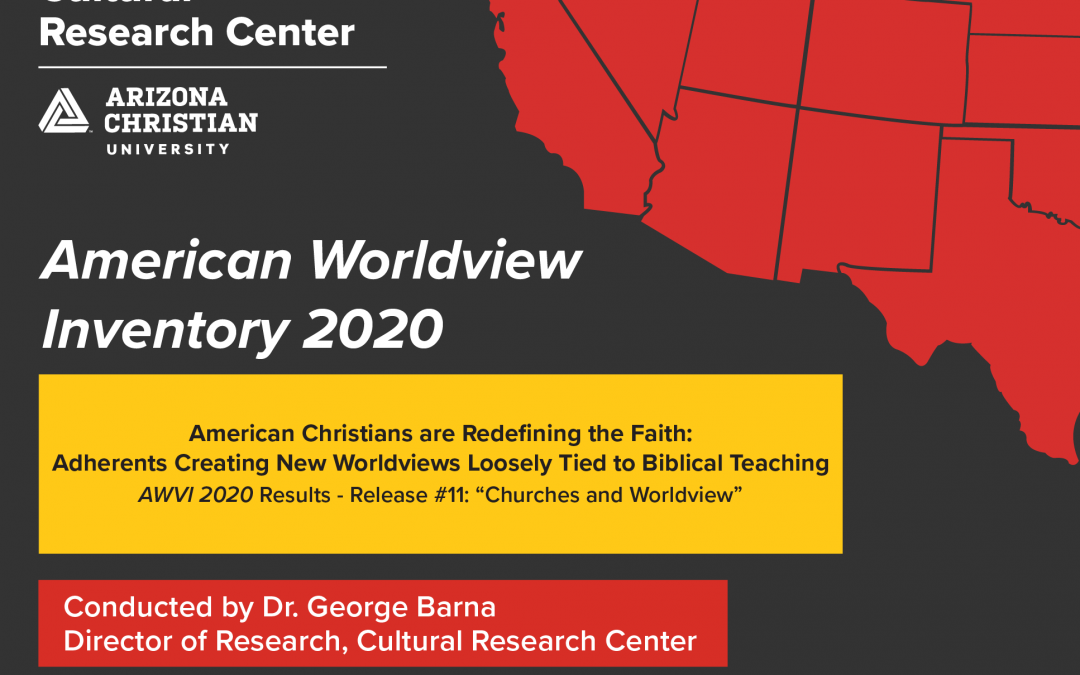 American Christianity is undergoing a “post-Christian Reformation”— and rather than providing leadership and faithfulness in an age of moral decline, members of the majority of the nation’s major Christian groups are rapidly leaving biblical foundations behind and exchanging traditional theological beliefs for the culture’s secular values.

New research from the Cultural Research Center at Arizona Christian University finds that members of the nation’s four main Christian groups—evangelicals, Pentecostals and charismatics, mainline Protestants, and Catholics—are customizing their beliefs and creating new worldviews that are only loosely tied to the biblical distinctives that have historically defined them.

According to CRC Director of Research Dr. George Barna, who conducted the research, “The irony of the reshaping of the spiritual landscape in America is that it represents a post-Christian Reformation driven by people seeking to retain a Christian identity.” Barna explained, “Unfortunately, the theology of this reformation is being driven by American culture rather than biblical truth.”

ACU President Len Munsil agreed. “As Christians, we are called to be ‘salt and light;’ to transform the culture around us by sharing biblical principles and living according to God’s truth. This latest research shows just the opposite is occurring.”

“What we are seeing is an American Christianity that is rapidly conforming to the values of a post-Christian secular culture,” Munsil said. “As a nation we are in need of a reset first to change the direction of individual Christians, and, ultimately, to transform culture.”

Most stunning in the research is the radical departure by evangelicals from traditional Scriptural teachings and historical reliance on the Bible. Evangelicals are rapidly embracing secularism, with a majority (52%) rejecting absolute moral truth, 75% believing that people are basically good rather than the biblical view of humans having a sin nature, and 61% admitting they no longer read the Bible on a daily basis. One-third to one-half of evangelicals embrace a variety of beliefs and behaviors in direct conflict with longstanding evangelical teaching, according to the American Worldview Inventory 2020.

The study found that the slide into secularism is even more pronounced among Pentecostals and charismatics. Two-thirds (69%) reject absolute moral truth; 54% are unwilling to define human life as sacred, with half claiming the Bible is ambiguous in its teaching about abortion, and 69% say they prefer socialism to capitalism. A full 45% did not meet the definition of born-again Christians.

Mainline Protestants are the most secular of the four main faith families. This includes those associated with the American Baptist Church U.S.A., the Episcopal Church, Evangelical Lutheran Church in America, Presbyterian Church U.S.A., United Churches of Christ, and United Methodist Church denominations.

According to the survey, 60% of mainline Protestants’ beliefs directly conflict with biblical teaching. Their customized belief system revolves around three key values: truth and morality are decided by the individual, not God or the Bible; life has no inherent value or purpose, so individuals should pursue personal happiness or satisfaction; and traditional religious practices are no longer seen as central or essential to their Christian faith. Only 41% of mainline Protestants are born-again.

The study found Catholics to be surprisingly similar to mainline Protestants, but considerably different from evangelical and charismatic Protestants. Catholics are most likely to believe in salvation through works or living a good life, and least likely (28%) to be born-again. Today’s Catholics are more permissive than other groups, being most likely to accept sexual relations outside of marriage, lying, speeding, and refusal to repay a loan as morally acceptable behaviors.

“It’s one thing for Americans to be confused on the finer points or even hotly debated elements of theology,” Barna explained. “But for Americans to misunderstand or to flat out reject the Bible as a foundational source of truth and moral guidance, to reject salvation by grace alone, and to reject core doctrines of the Christian faith points to a major crisis in our society.”

The AWVI 2020 surveyed 51 beliefs and behaviors among the four Christian faith families, and the full release, “Churches and Worldview,” is available on the CRC website.