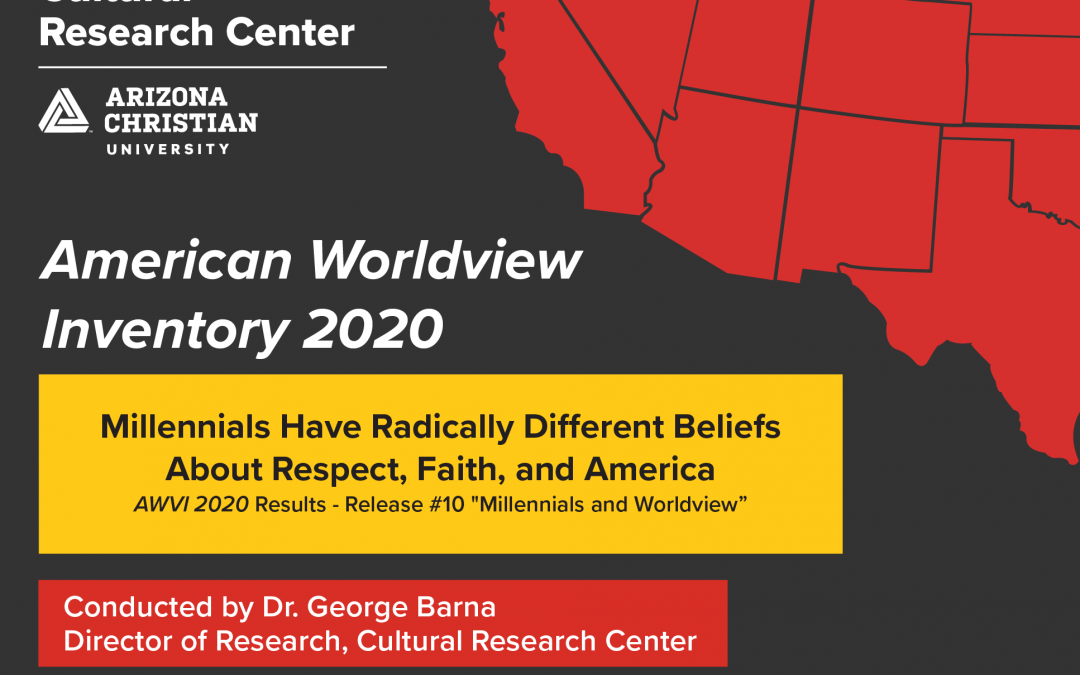 America has undergone a tectonic worldview shift in the past 25 years—with only 6 percent of adults today possessing a biblical worldview compared to twice that (12 percent) in the mid-1990s.

And nowhere are the effects of this dramatic cultural change more evident than among the Millennial generation (ages 18 to 36), which is more radically different in worldview, beliefs, and values than any other generation in American history, according to new research from the Cultural Research Center at Arizona Christian University.

The latest findings from the American Worldview Inventory 2020 show that Millennials are breaking from traditional values at an unprecedented rate. The groundbreaking research identifies three specific dimensions in which the worldview of the youngest adult generation strays farthest from traditional norms: respect for others, interest in faith, and enthusiasm for America.

According to Dr. George Barna, CRC Director of Research and author of the study, Millennials are increasingly rejecting the Christian faith—only 2 percent possess a biblical worldview—and spurning the beliefs and faith practices of previous generations.

The survey found that the faith gap between Millennials and their predecessors is the widest intergenerational difference identified at any time over the last seven decades.

The largest generational gap exists between Millennials (18-36) and Boomers (56-74). While the two oldest generations among the nation’s adults, those currently in their mid-50s and beyond (i.e., Baby Boomers and Elders), were surprisingly similar in their views on most of the items tested.

ACU President Len Munsil said these latest findings confirm his generation’s deepest concerns about young Americans. “We’ve always sensed that the culture has been pulling the next generation away from biblical values and truths many were raised with. This study is more confirmation, and illustrates the necessity of preparing young Christians with a heart to transform their generation with biblical truth.”

According to Dr. George Barna, CRC Director of Research and author of the study, the most recent findings are “deeply troubling.” He explained, “The significantly divergent worldview perspectives and applications of the four generations—especially how different the Millennials are from their predecessors—suggests a nation that is at war with itself to adopt new values, lifestyles, and a new identity.”

The AWVI 2020 finds that Millennials are:

And when it comes to beliefs and faith practices, Millennials are significantly less likely to:

Barna said, “The data also points out that America is losing its spiritual unity at a rapid pace. Even a rudimentary understanding of the foundations of the American republic reminds us that unless the United States maintains spiritual unity under the hand of God, we will not be able to sustain the freedoms that have made this nation unique and desirable. The heart and soul of the nation will pursue other gods and beliefs to our demise as a nation.”

The full report, “Millennials and Worldview,” can be found here.