CRC Survey: Election 2020 Shaping Up as ‘War of Worldviews’ 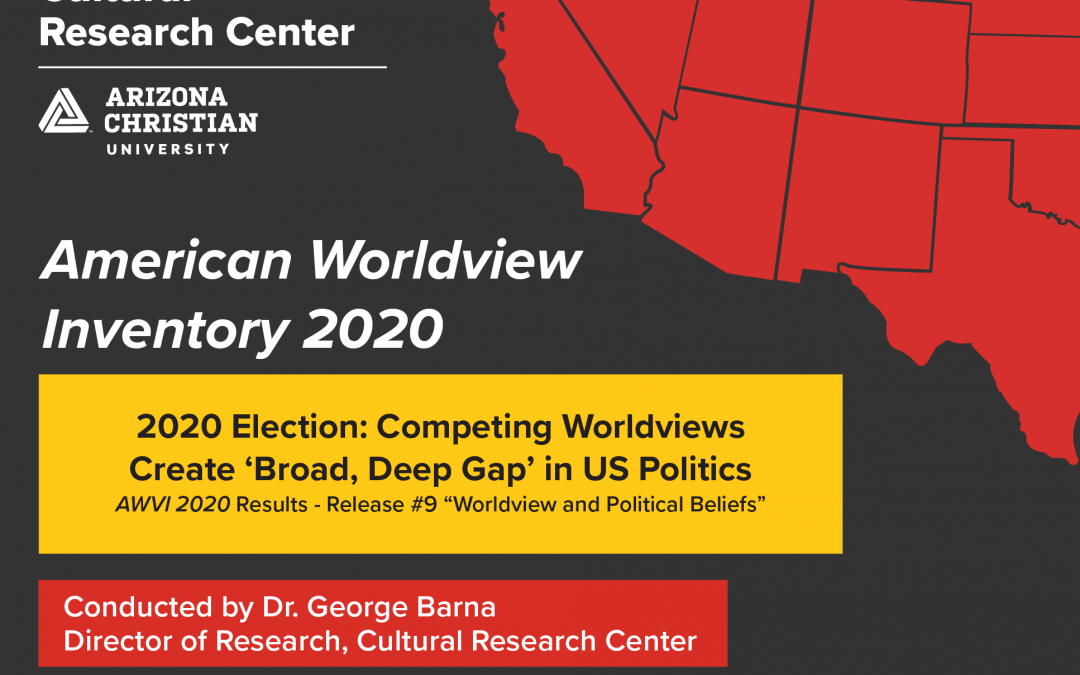 As the 2020 election nears, new research from the American Worldview Inventory 2020 shows a broad, deep gap in American political beliefs and behavior, rooted not in ideology or partisanship, but in fundamental differences in the worldview of voting-age adults, fueled by a national cultural shift away from the biblical worldview.

Veteran researcher and author of the survey, Dr. George Barna, says the findings lead to one unmistakable conclusion: “The 2020 election is not about personalities, parties, or even politics. It is an election to determine the dominant worldview in America.”

According to the latest AWVI report from the Cultural Research Center at Arizona Christian University, worldview differences are driving deep divisions in American politics, with those possessing a biblical worldview much more likely to be “consistently conservative,” while those holding an alternative worldview tend to support “consistently liberal” policies.

Nowhere is this political chasm clearer than in how American adults view economic issues. A full 98% of those who prefer socialism over capitalism also reject the biblical worldview, according to the new findings.

“This study provides further evidence that we are in the midst of a war of worldviews,” said Arizona Christian University President Len Munsil. “The biblical worldview that enabled our nation to achieve levels of peace, prosperity and justice unprecedented in human history is under assault by an ideology that devalues innocent life and threatens religious and economic liberty.”

The findings show that those who possess a biblical worldview are more likely to be consistently conservative (78%), preferring capitalism over socialism (83%), favoring conservative fiscal (80%) and social (91%) policies, opposing abortion based on clear biblical teaching (89%), and holding a more conservative, limited view of the size and scope of government (83%).

Conversely, only 5% of those with a biblical worldview are likely to adopt liberal views on fiscal, social and governance issues. According to the research, those without a biblical worldview are more likely to support liberal fiscal (26%) and social (40%) policies, do not believe the Bible is unambiguous in its views on abortion (38%), and favor a more liberal, expansive view of governance (26%).

According to Barna, CRC Director of Research, the current political upheaval in the United States is a consequence of a constantly changing, person-centered philosophy of life–i.e., worldview—that is fighting for pre-eminence in the nation’s economic, political, religious, educational, and familial spheres.

Barna said this split increases tensions in American politics, as both sides try to win over those with no consistent preference. “Come November 3 we will know which worldview has won the hearts of Americans and will then determine the foundation for the nation’s values, lifestyles, and public policy for the near future.”

The full AWVI 2020 Release #9: ““Worldview and Political Beliefs,” as well as previous releases, can be found here.