AWVI 2020 Survey: 1 in 3 US Adults Embrace Salvation Through Jesus; More Believe It Can Be ‘Earned’ - Arizona Christian University

AWVI 2020 Survey: 1 in 3 US Adults Embrace Salvation Through Jesus; More Believe It Can Be ‘Earned’ 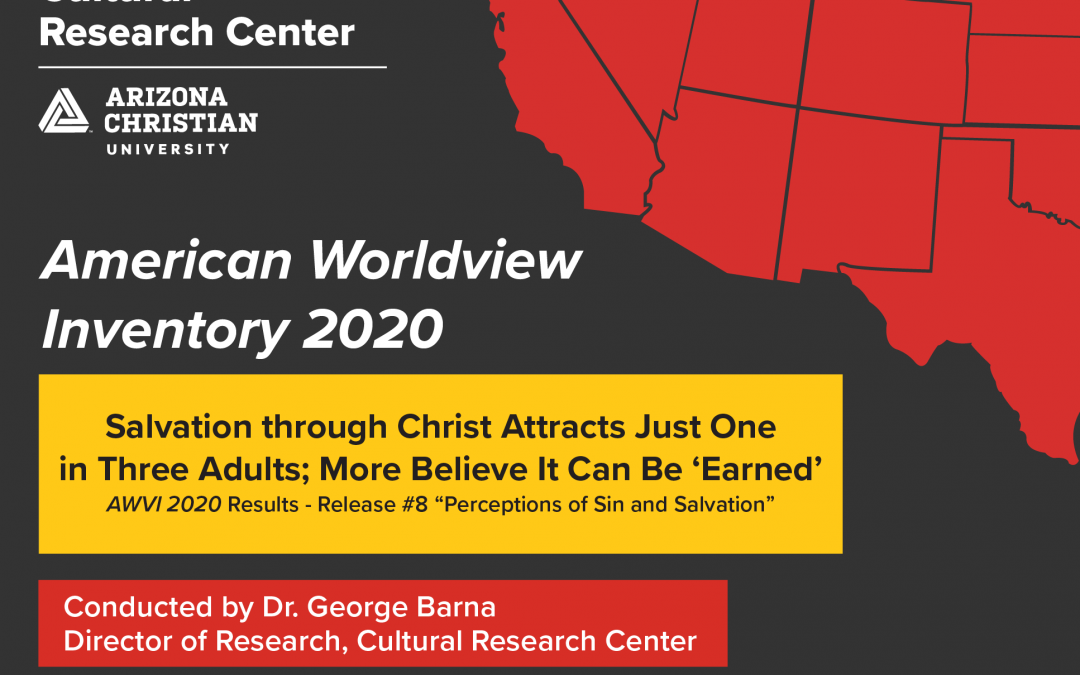 Unlike past generations of Americans, who readily recognized the reality of sin and the need for salvation through Jesus Christ, U.S. adults today adopt a “salvation-can-be-earned” perspective, with a near-majority (48%) believing that if a person is generally good, or does enough good things during their life, they will “earn” a place in Heaven.

Only one-third of American adults (35%) continue to embrace the traditional biblical view that salvation comes through the sacrifice of Jesus Christ, according to findings from the American Worldview Inventory 2020 from the Cultural Research Center at Arizona Christian University.

“This lack of understanding of basic Christian theology is stunning, with potentially devastating consequences for individual souls and really for all aspects of American life and culture,” according to ACU President Len Munsil.

“It’s a wakeup call for the church, and for leaders in all areas of influence, to speak, teach, and work to restore biblical truth,” Munsil said. “Many souls will be lost if people are misled by the false notion that we can earn our way to heaven, rather than recognizing the truth that Christ alone and His righteousness are the basis for our salvation.”

The most recent findings of the AWVI 2020, conducted by CRC Director of Research Dr. George Barna, also show that these views of sin and salvation have permeated American culture so deeply that even a majority of people who describe themselves as Christian (52%) accept a “works-oriented” means to God’s acceptance.

What is even more shocking is that huge proportions of people who attend churches whose official doctrine says eternal salvation comes only from embracing Jesus Christ as savior nonetheless believe that a person can qualify for Heaven by being or doing good. That includes close to half of all adults associated with Pentecostal (46%), mainline Protestant (44%), and evangelical (41%) churches. A much larger share of Catholics (70%) embrace that point of view.

In addition, the relevance of sin is on the wane, with only slightly more than half of U.S. adults (56%) saying they consciously and consistently attempt to avoid sinning because they know it offends God.

According to Dr. Barna, these findings are consistent with earlier AWVI 2020 releases. “If you step back and look at the big picture painted by all of the outcomes in this research project it seems to suggest that people are in an ‘anything goes’ mindset when it comes to faith, morals, values, and lifestyle.”

Barna continued, “By abandoning our moral standards and traditions, and replacing them with inclusive and conditional preferences, we are losing the foundations that have enabled the ‘American experiment’ to succeed for more than two centuries.”

“We can only hope that our critical moral institutions – particularly the family and churches – will wake up and help the nation to get back on track,” Barna said.

Other key findings from the latest AWVI 2020 release include:

The full AWVI 2020 Release #8: “Perceptions of Sin and Salvation,” as well as previous releases, can be found here.

Athletics
Alumni
Give
Student Portal
Visit
Brand Center
Parents
Privacy Policy
Sitemap
Contact
We use cookies to ensure that we give you the best experience on our website. If you continue to use this site we will assume that you are happy with it.OK