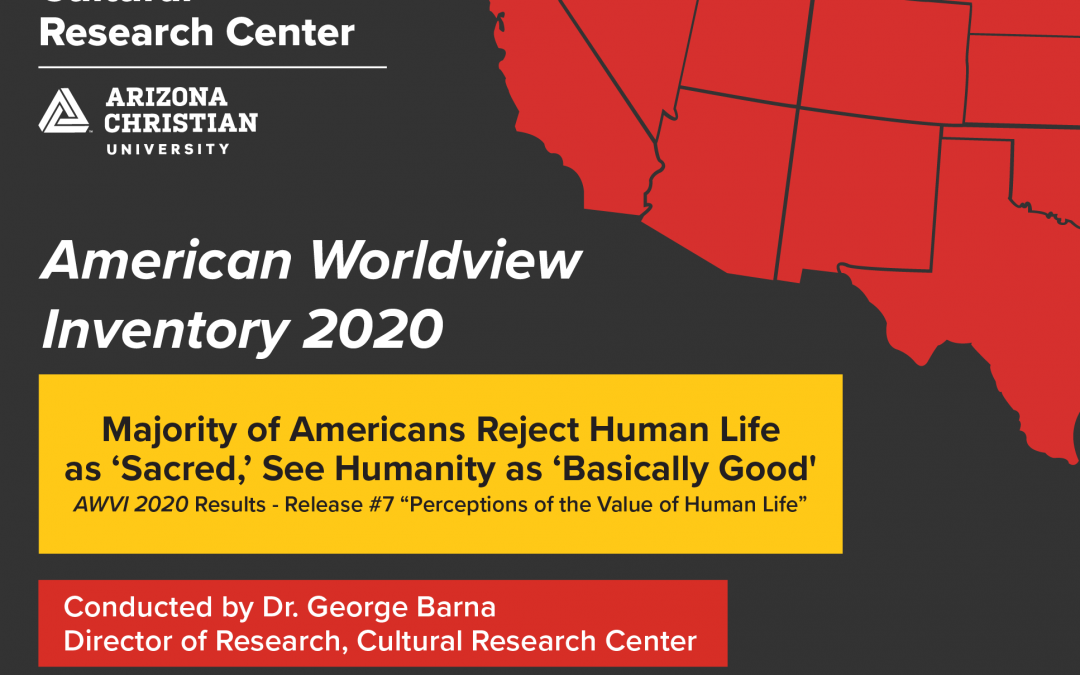 New research from the Cultural Research Center at Arizona Christian University also shows that almost seven out of ten—a whopping 69%—of Americans see human beings as “basically good.” This view is so pervasive that a majority of every subgroup of Americans studied in the American Worldview Inventory 2020 adopted it. The segment least likely to say “people are basically good” are people with a biblical worldview (52%).

The notion of the essential goodness of humanity runs counter to the foundational biblical teaching that human beings are created by God and made in His image, but are fallen and in need of redemption. This faulty view of humanity as basically good has increasingly permeated American culture to all but the most conservative, deeply religious segments of our society. Only a slight majority of Americans—56%—hold the biblical view that human beings were originally created Imago Dei, but are fallen and in need of a Savior.

The latest release from the AWVI 2020, conducted by CRC Director of Research Dr. George Barna, powerfully demonstrates that as our nation continues to drift from its biblical foundations, we’re losing our most basic understanding of what it means to be human. Central to that understanding is the uniquely Christian belief in the dignity and worth of every human life.

“As we reject the biblical worldview for what we might think are more enlightened human values, ironically we are rejecting the source of the very things that make us human,” explained ACU President Len Munsil. “When we no longer value life, when we no longer acknowledge our sin nature, when we no longer see our need for a Savior, things become incredibly dire for our nation.”

“Our nation was founded on fundamental ideas that come directly from God and the Bible—that we have natural rights to life, liberty, and the pursuit of happiness, and these rights come from God, not the government. But because we are flawed, we have never perfectly lived up to these ideals, most notably with the horrific sin of slavery and its aftermath. But the principles are true and correct,” Munsil said.

“These ideas are embedded in our Declaration of Independence, our Constitution, in our national DNA. The goal now should be reform, not revolution. But reform will be impossible if our people reject the foundation of biblical truth that has undergirded commitment to liberty and virtue,” he said.

“It’s no accident that the right to life is the first among these foundational American values. When we experience an erosion of the deference and protections we give to human life, this constitutes a profoundly dangerous shift in American values,” Munsil said.

For Barna, the findings point to the need for a recommitment to teach foundational biblical principles to the next generation. “Logically, given that a person’s worldview is largely in place by the age of 13 and then is refined and expanded during a person’s teens and twenties, focusing on the moral development of young people and college students will be an effective, lasting strategy,” Barna continued. “Raising our future leaders to experience and understand love, compassion, mercy, truth, and goodness will make a massive difference.”

“From a biblical perspective, the problem is that we have a sin nature, pure and simple. We can deny it, but it still exists. Every society can benefit from specific systemic changes, present-day America included. But any systemic changes designed to transform the culture will be short-lived and of limited impact unless the hearts and minds of the people who populate that system are transformed first,” Barna explained.

Here are a few other key AWVI 2020 findings:

The full results of the seventh installment of the American Worldview Inventory 2020 release, are available here.