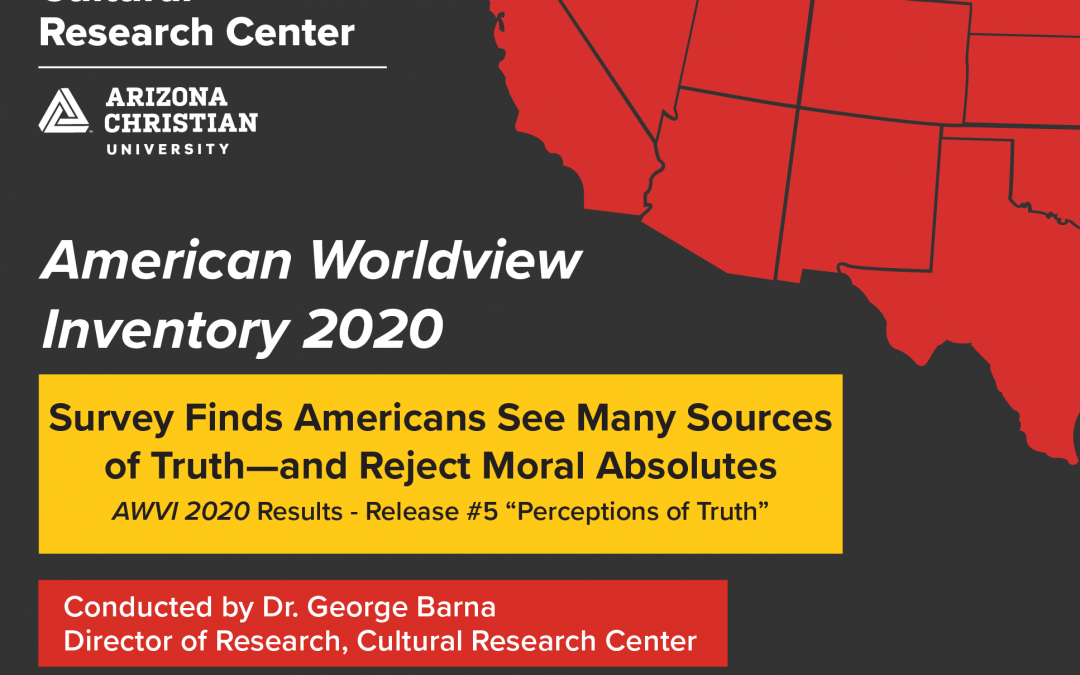 Belief in absolute moral truth rooted in God’s word is rapidly eroding among all American adults. This includes those who are both churched and unchurched, those belonging to every political segment, and from every age group. Even among those who do identify God as the source of truth, there is substantial rejection of any absolute standard of morality in American culture.

“We’re living in an America increasingly unmoored from its founding in biblical truth,” said Arizona Christian University President Len Munsil. “Even in the most basic questions of life, like how we make moral choices, we’re choosing to lean completely on our own understanding to decide what’s right and wrong.”

“We are created by God to live according to His unchanging moral standards,” Munsil explained. “He created these boundaries for our good and we ignore them at our peril. There’s no way as individuals, or as a nation, that we can live life well, that we can flourish, that we can live with hope, without God’s moral framework for our lives.”

According to the latest findings from Dr. George Barna, Director for the Cultural Research Center at ACU, most Americans reject any absolute boundaries regarding their morality. A majority of adults surveyed—58%—instead believe that moral truth is up to the individual to decide.

This latest study shows that secular views of morality are flooding American culture, including the Christian church. Perhaps most stunning, the survey found that those attending evangelical churches, which believe the Bible to be the true, reliable word of God, are just as likely to reject absolute moral truth (46%) as to accept its existence (48%). And only a minority of born-again Christians—43%—still embrace absolute moral truth.

The pull of secularism is especially strong among younger Americans. Those under age 30 were much less likely than older adults to select God as the basis of truth (31% compared to 45%) and more likely to say that moral standards are decided by the individual (60%).

Munsil said, “At ACU we’re committed to the vision of transforming culture with God’s truth. Our students are trained to understand and defend biblical truth, and to take that truth to a world that, according to this research, desperately needs it.”

So where are Americans finding “truth”? The survey found that the most common notion is that God is the basis of truth—but only for a minority of four out of ten adults (42%). Another four out of ten rely on inner certainty (16%), scientific proof (15%), tradition (5%), or public consensus (4%) to know truth. The remaining two out of every ten adults said that either there is no such thing as truth (5%) or that they do not know the basis of truth (13%).

Barna, who directed the study, noted that the research suggests Americans are radically redefining how life works. “Americans have historically held the biblical view that God created our world and the life within it, and He provided specific guidelines that would provide for our well-being when we stay within those boundaries. But things are changing.”

According to Barna, this seismic shift shows that most Americans are defining their life purpose apart from the intent of God. “Now we see that the majority of Americans have rejected the idea that God is truth and that the principles He has given for our good are reliable and relevant. As a nation we are becoming increasingly self-reliant. We trust ourselves or our discoveries rather than the truth God provides,” he said.

The implications of these findings are staggering, especially for young people and college students, according to Dr. Tracy Munsil, CRC Executive Director. “Like every generation before them, this next generation is seeking guidance for how to live, how to understand truth and morality, how to live their lives in a way that brings success and meaning. They look to the older generation, to parents, mentors, professors. But even these groups are rejecting absolute moral truth rooted in God’s word.”

She continued, “Increasingly, they find themselves in a culture that, from top to bottom, rejects God’s truth and says to them, ‘You are free to determine your own morality. Look to yourselves, to science, to whatever you can find, for guidance on how to live your lives.’”

Dr. Munsil, also an associate professor of political science at ACU, said these findings point to a desperate need for greater engagement by older, grounded Christians. “We are seeing an untethered generation, the next generation of young people completely adrift, with no foundation in God, biblical truth, or standards of morality—the very things that enabled generations before them to live well and flourish.” She explained, “Those who still recognize and embrace the truth of God and His standards have a responsibility to share these with the next generation. Or they will be lost to this next generation, and maybe to our nation forever.”

Other key findings from the latest release from the American Worldview Inventory 2020:

The Cultural Research Center at Arizona Christian University exists to advance the Kingdom of God by conducting cultural and biblical worldview studies that will provide research and resources to inform and mobilize strategic engagement in cultural transformation. CRC’s biblical worldview research is used in developing resources for ACU’s CORE curriculum and supports the University’s vision of transforming culture with truth.

This latest CRC report, “Survey Finds Americans See Many Sources of Truth—and Reject Moral Absolutes,” is the fifth of 12 biweekly releases from the American Worldview Inventory 2020. The full results of this recent release are available here.