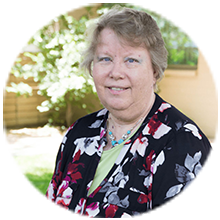 Libbie’s academic musical interests include composing, conducting, teaching theory, and playing violin. She has been active as producer and conductor for church productions (1999-2018) and for 15 theater works at Southwestern Repertory Theatre. Productions include Gilbert and Sullivan operettas (Mikado and Pirates of Penzance), and musicals such as Singing in the Rain, Jane Eyre, and Oklahoma!.

Libbie left her parents’ childhood cult to encounter Christ in 1990. Since then, she has worked in music ministry as choir and/or orchestra conductor: Grace Community Church of Tempe (1999-2004), First Baptist Church of Tempe (2005-2007), and Hillside Southern Baptist Church (worship team, serving until covid). She has three grown children and seven grandchildren. Libbie lives in continuing gratitude for Jesus saving grace.