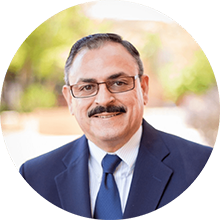 Dr. Clavell has served at Arizona Christian University since 2008 he has taught Leadership, Business and Biblical Studies.

Dr. Clavell began his professional career as a metal craftsman and entrepreneur in New York City. Upon moving to Arizona, Dr. Clavell continued his entrepreneurial ventures, as owner-operator of Jessco Industries and production manager of Heritage Metalworks, along the way he transitioned into church ministry and academics. His ministry experiences include Children’s Pastor, Church Plant Pastor, and Executive Pastor.

Dr. Clavell has served as Dean of Students at Phoenix Seminary, Director of Escuela de Esperanza, adjunct professor at Southwestern/ACU and interim Chair of Biblical Studies Department at Arizona Christian University. He is a member of the National Association of Church Business Administrators and the Christian Business Faculty Association.

In 2011, Dr. Clavell founded Pilgrimage Consulting, coming alongside; Pastors, Business Leaders and Organizational Leaders to develop strategies and systems needed, to reach the vision God has given these leaders and their organizations to grow His [God’s] Kingdom.

Dr. Clavell and his wife Sandra live in Chandler, Arizona. They have been married for over 40 years. They have two married adult sons Shawn, wife Sarah, and Justin, wife Desi.

Dr. Clavell is a fan of the game of baseball, with his favorite teams being the Arizona Diamondbacks and NY Mets. In addition, he enjoys music, cooking, reading, and spending as much time as he can with his family.