Sitting on the Steps of the Women’s Dorm 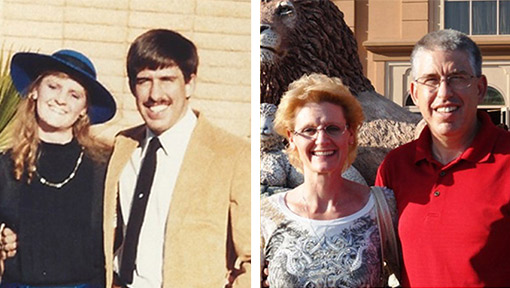 By Toby Kendrick, Class of ’87 (paraphrased)

[Editor’s note: This month we asked our alumni family to share their stories of how they met their spouse while at SWC/ACU. We were grateful for all the submissions and celebrate how many couples the Lord has brought together during their time here. Below is Toby and Cheryl’s love story…]

I transferred to Southwestern College in 1984 from the great state of Nebraska. Truly, this was a new experience for a farm kid moving to the big city. One of my greatest experiences was when I noticed a beautiful blonde girl sitting on the steps of the girl’s dorm.

I thought she was out of my league.

Later, I began dating Cheryl’s (Convery) best friend, so naturally Cheryl and I began to spend time together and became good friends ourselves.

Needless to say my dating experience with her friend did not go very well, and I found myself spending a lot of time talking with Cheryl about why my relationship with her friend was struggling to move forward.

Interestingly, Cheryl both attended the same church.  We were impressed with each other’s passion for the Lord and had much in common. Her mom’s family was from a small ranch community in Arthur, Nebraska, which was only a couple of hours away from where I grew up.

Eventually her friend and I broke up and I went “crying” to Cheryl.

I am not sure of the exact time we began to think of each other as more than friends.  But I remember when I and a group of friends, including Cheryl, went to the Arizona State Fair.

We were all going on a particular ride and I really, really, was hoping I could sit with Cheryl.  God is good, he granted that prayer request. Later on, Cheryl told me she was a little upset that during the drive back to campus, that she had to sit in the back with my sister. I didn’t know it at the time, but she really wanted to sit up front with me.

I remember the night our relationship became real. I was coming back to campus from somewhere and was determined to let her know that I was falling in love with her. Of course, I was scared to death. What if she did not feel the same? Our friendship might be damaged. But the reward was greater than the potential cost and I remember getting up the courage to tell her just before curfew (yes, this was back in the days when we had curfews at the dorms and we had to wear ties to class).

My hands were shaking, but I blurted out that I saw her as more than as a friend . . . and I proclaimed my love. To my relief she reacted with excitement and agreement.  We didn’t kiss, as that would have gone against the policy of NO PUBLIC SHOWING OF AFFECTION.  But we should have.

From then on, our relationship grew stronger and stronger. So much so that I asked her to marry me that Christmas (a whirlwind romance that has now spanned over 33 years).  When you find the pearl there is no reason to wait.

Of course, later on with our three sons, I may not have been so quick to give that advice. But in the end, we knew God was over our relationship and that He is the one who brought us together. Two people, whose paths may have crossed before, had to move hundreds of miles away so that we could come together. We were married the summer of 1987.

My years at SWC were very special and a wonderful time of spiritual growth. But, my greatest memory will be when I met that beautiful blonde girl with whom I would share the rest of my life. There is not a day that I am not thankful for the years spent, the education obtained, and the relationships developed at Southwestern College.