Is the Bible True? CRC Survey Shows America’s Distrust of the Bible Undermines Its Worldview 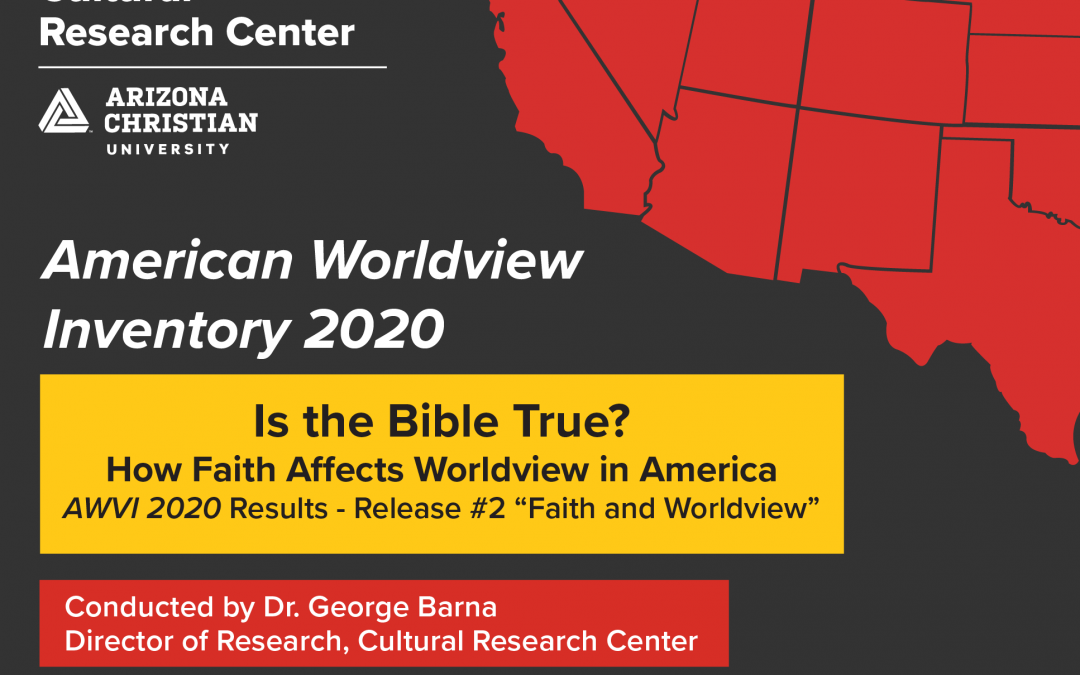 Growing skepticism about the Bible, especially among young people and even in some of the nation’s largest Christian denominations, is to blame for the precipitous decline of biblical worldview in America.

Stunning new results from the American Worldview Inventory 2020, produced by the Cultural Research Center (CRC) at Arizona Christian University, found that the percentage of Americans who believe that the Bible is the inspired, true word of God is down more than 21 percentage points since 2000. This parallels a similarly precipitous 50% decrease in biblical worldview in America over the same time period, from 12% to the current 6%—the lowest number ever recorded.

“These trends could be devastating—but only if they continue,” said ACU President Len Munsil. “Our priority is to reverse these trends, especially in how we educate the next generation. For example, at Arizona Christian University, every student is immersed in studying the Bible and taught to think and live according to the biblical worldview.”

“We want our graduates to lead lives that fully embrace and reflect the biblical worldview,” he said. “Nothing is more important than preparing our students for lives of influence for the Kingdom in all areas of leadership in America and the world.”

The latest findings show significant shifts in the relationship between peoples’ faith and their worldview, including unexpectedly dramatic changes in how Americans view the Bible. Trust in the Bible can be seen to vary by religious affiliation, with growing skepticism continuing to drive the decline in the biblical worldview in America, according to the AWVI 2020, the first annual nationwide worldview survey conducted by veteran researcher Dr. George Barna, Director of Research for the CRC at ACU.

As Barna noted about these AWVI 2020 results, “What we’re seeing, the weak linkage between Bible appreciation, church affiliation, and biblical worldview, especially among young people, is concerning for the future of the nation.”

The results from this new research emphasize the importance of carefully measuring and intentionally developing the biblical worldview, especially among younger people. CRC, which conducts strategic cultural research through a collaborative effort of the faculty and staff at ACU, is facilitating cultural transformation in America through worldview education. CRC is the only institute conducting this kind of nationwide worldview research and is using those studies as the foundation for creating new resources for worldview training. CRC’s goal is to share its research findings with those who share a vision for Bible-driven cultural transformation.

This latest report, “Is the Bible True? How Faith Affects Worldview in America,” is the second of 12 biweekly releases from the AWVI 2020.  The full release of these latest findings is available here here.