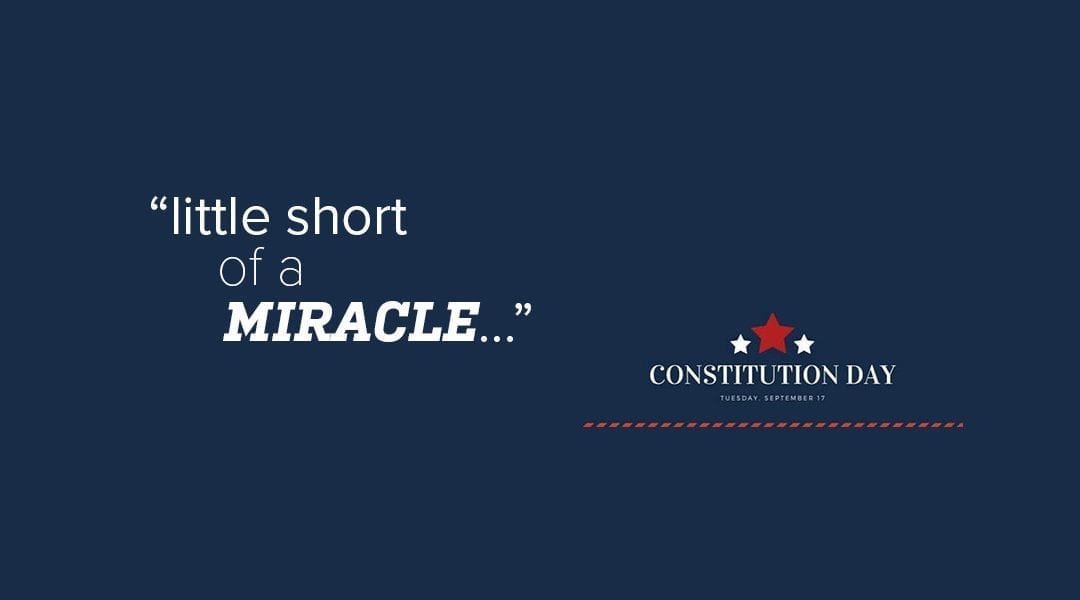 “Little short of a miracle …”

If George Washington had lived during our social media age, when the final draft of the Constitution emerged from the Constitutional Convention 232 years ago today, his first “tweet” might well have been – the new Constitution is “little short of a miracle.”

That is exactly how Washington described it in a letter a few months later to Marquis de Lafayette, the French major general who defended the Revolutionary cause at the Battle of Yorktown: “It appears to me then, little short of a miracle, that the Delegates from so many different States (… different from each other in their manners, circumstances, and prejudices) should unite in forming a system of national government.”

In fact, Washington even confessed later in the letter that he was not “such an enthusiastic, partial or undiscriminating admirer of it, as not to perceive it is tinctured with some real (though not radical) defects.”

Faint praise, to be sure.

What the U.S. Constitution had going for it then – and what still makes it great today – is the fact that at its foundation is a biblical worldview understanding of human nature. A clear-eyed understanding that human beings are sinful and fallen, likely to pursue narrow self-interest and personal ambition over the common good, prone to corruption and abuse of power – and we need a government that reflects those basic truths about who we are.

This foundational biblical understanding guided the creation of the U.S. Constitution – from its intentional dispersal of power into three branches of government with an extensive system of checks and balances, to its creation of federalism that carefully balanced state and national authority, to its expansive protections against governmental incursion into political, economic and religious liberty, as well as against tyranny of the majority. And finally, its recognition of “We, the People” – as the source of authority in a representative government.

As James Madison puts it so clearly in Federalist 51:

But what is government itself, but the greatest of all reflections on human nature? If men were angels, no government would be necessary. If angels were to govern men, neither external nor internal controls on government would be necessary. In framing a government which is to be administered by men over men, the great difficulty lies in this: you must first enable the government to control the governed; and in the next place oblige it to control itself. A dependence on the people is, no doubt, the primary control on the government; but experience has taught mankind the necessity of auxiliary precautions.

None of our founders harbored any illusions that human beings are angels or perfectible, or that the Constitution was perfect or that it ever could be. Rather, they knew they were trying to create “a more perfect Union” – a new kind of representative republic that was better than the Articles of Confederation it was replacing, better than the British monarchy it had overthrown, better than a pure democracy that history had taught them devolved into tyranny of the majority and mob rule.

The new system was better. But it could never be perfect, because those creating it and those it governed were imperfect.

They even anticipated the need for amendment – 27 times in 232 years. And many of its signatories and advocates clearly recognized two unresolved issues inherent in the document – slavery and states’ rights – issues that would later be resolved only through the bloody Civil War and its aftermath.

The Constitution itself ultimately laid the groundwork for the elimination of slavery, not only through the amendment process but through its commitment to justice. In the Preamble, the framers made clear their intent to “establish justice” and “secure the blessings of liberty” for themselves and future generations – principles that rang hollow to African Americans living in nation “half-slave” and “half-free.” Slavery is never mentioned in the original Constitution. In Article 1, Section 9, Congress was allowed to ban the slave trade after 20 years, which it did in 1808. Abolitionists used these very principles of the Constitution and also those found in the Declaration of Independence to support elimination of this horrific practice.

Despite his misgivings and the fact that only five states of the required nine had voted for ratification by the time of his letter, Washington expressed cautious optimism to Lafayette about the new Constitution, assured by the idea that the new republican government had “more checks and barriers against the introduction of Tyranny, & those of a nature less liable to be surmounted, than any Government hitherto instituted among mortals, hath possessed.”

Not perfect, but the best yet devised “among mortals.” He, too, embraced the biblical worldview when it came to politics, confident that the new government could prevail “so long as there shall remain any virtue in the body of the People.”

We take so much in our constitutional system for granted. We forget so much about the Constitution that makes it unique, even exceptional among nations. Few of us might think to describe it as miraculous, though clearly it is.

We forget that it established the longest existing Constitutional republic in human history – 232 years have passed since it was drafted and signed by 39 members of the Constitutional Convention on this day in 1787.

We forget that it is the result of tremendous intellectual and political courage, to create something that had never been tried before – the delegates trusting in their understanding of human nature, their knowledge of history, and their commonsense principles of good government and commitment to liberty. Trusting their ability to use “the science of politics” to adapt the best principles – a term used by Alexander Hamilton in Federalist 9 and Washington in his letter to Lafayette – to the unique American setting.

We forget that this new system of government was literally “argued into existence … by means of an intense debate between partisans of different political persuasions and theoretical perspectives.” The ratification debate was in no way a foregone conclusion, despite ratification eventually becoming unanimous when the Bill of Rights was added.

And, most importantly, we forget that the U.S. Constitution has within it features of government then new and unique to the American context, but which have served as the model for free governments ever since. Here are just a few features that had never existed in human history before September 17, 1787:

In his First Inaugural Address in 1981, President Ronald Reagan said: “To a few of us here today this is a solemn and most momentous occasion, and yet in the history of our nation it is a commonplace occurrence. The orderly transfer of authority as called for in the Constitution routinely takes place, as it has for almost two centuries, and few of us stop to think how unique we really are. In the eyes of many in the world, this every 4-year ceremony we accept as normal is nothing less than a miracle.”

This Constitution Day, I’d encourage you to remember and appreciate the “miracle” of our Constitution, and not take it for granted. It is the model and the envy of all freedom-loving people around the world. You probably can’t imagine living without the liberty it protects or the system of government it created. Trust me, you don’t want to! Happy 232rd birthday, U.S. Constitution!

And if you have some time, take this 10-Question Constitution Quiz (there are 50- and 100-question quizzes here, too – but this is a good warm-up): https://www.constitutionfacts.com/?page=quiz.cfm